Publications & Resources
Made in Los Angeles: Materials, Processes, and the Birth of West Coast Minimalism 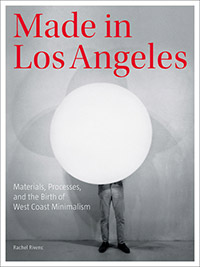 In the 1960s, a group of Los Angeles artists fashioned a body of work that has come to be known as the "L.A. Look" or West Coast Minimalism. Its distinct aesthetic is characterized by clean lines, simple shapes, and pristine reflective or translucent surfaces, and often by the use of bright, seductive colors. While the role of materials and processes in the advent of these truly indigenous Los Angeles art forms has often been commented on, it has never been studied in depth—until now.

Made in Los Angeles focuses on four pioneers of West Coast Minimalism—Larry Bell, Robert Irwin, Craig Kauffman, and John McCracken—whose working methods, often borrowed from other industries, featured the use of synthetic paints and resins as well as industrial processes to create objects that are both painting and sculpture. Bell, for example, coated plate glass with films of material that alter the way the light is absorbed, reflected, and transmitted, while Kauffman employed a process usually reserved for commercial signs for his work. McCracken coated plywood with fiberglass then spray-painted it with countless layers of automotive paints, and Irwin spray-painted discs of hammered aluminum or vacuum-formed plastics. The detailed study of each artist's work is presented in the context of the emergence of modern art in Los Angeles, the burgeoning mid-twentieth-century gallery scene, and the light-infused L.A. cityscape.

Initially undertaken as part of the Pacific Standard Time: Art in L.A. 1945–1980 initiative, this volume combines technical art history and scientific analysis to investigate conservation issues associated with the work of these artists, which are often emblematic of issues in the conservation of contemporary art in general.