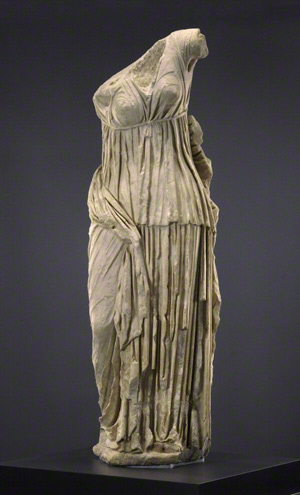 Torso of a Draped Female, Roman, A.D. 1–100. Marble, 64 15/16 in. high. The J. Paul Getty Museum, 54.AA.12
The starting point for modern artists' involvement with antiquity was the art academy practice of studying plaster casts of classical sculpture, especially bodies draped and naked—such as this statue of a Muse or goddess, now missing her head and both arms.

Pablo Picasso used a rich mixture of ancient art, including Greek vase paintings, Pompeian frescoes, and Roman sculptures, as inspiration for his work as a figurative artist.

Giorgio de Chirico was a painter of dreams; a contemporary critic wrote that his paintings are populated with figures that might come from a museum of plaster casts.

In the 1920s Pablo Picasso became a sun worshipper on the beaches of the Mediterranean, where he surrounded himself with family and friends whose bodies were on constant display.

Combining his memories of ancient art seen in Naples and Pompeii with his knowledge of the European old masters, he depicted monumental women with huge limbs packed with strength as if they were living sculptures.

Created when Picasso's figure painting was at its most monumental, the 1921 Seated Woman has the weight and poise of ancient sculpture, but her proportions are far from classical. She may share the dignity of figures seen in Greek grave reliefs, but her heavy arms, oversize fingers, and large nose fit no conventional ideal.

In the 1920s Fernand Léger made a series of paintings of "mechanized" female nudes. The pose of the figure in his 1927 painting Nude on a Red Background comes close to a famous ancient sculptural type, the Crouching Aphrodite, which Léger would have known through versions in the Louvre Museum in Paris.

By this association, she is presented as classically beautiful, yet she is sheathed in steel rather than flesh modeled in marble. Her flawless form is set against a blank, boldly colored background, just as consumer products were positioned in the advertising of the period.

For the 1931 painting Adam and Eve, Francis Picabia copied an ancient Roman sculptural group known as Orestes and Electra, significantly altering the figures' appearance by giving them stylized expressions and big, unclassical hair. In a further ironic twist, Picabia called these mythological siblings Adam and Eve.

Adam and Eve is one of Picabia's later "transparencies," a series of paintings in which various elements are layered in superimposed outlines. Here his attitude toward antiquity seems to have shifted from the allegorical to the amused.