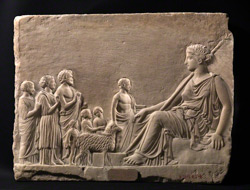 Relief with Aphrodite and Worshippers, Greek, 400–300 B.C. Marble, 18 3/8–19 1/8 in. high x 23 1/4–24 1/2 in. wide. Soprintendenza Speciale per i Beni Archeologici di Napoli e Pompei. Museo Archeologico Nazionale di Napoli. Image © www.pedicinimages.com
Aphrodite held sway in many realms: sex, marriage, fertility, sailing, civic order, even war. The breadth and diversity of Aphrodite's powers meant that a single city might have multiple shrines, each dedicated to specific aspects of the goddess. The recurrent theme for her devotees—male and female, young and old—was her capacity to create harmony and union. This could be purely sexual, or could pertain to marriage or fertility.

Furthermore, because of her ability to bring about unity, Aphrodite was perceived as able to grant good order and smooth sailing. In certain cities she served an even greater and sometimes martial role, acting as civic protectress. 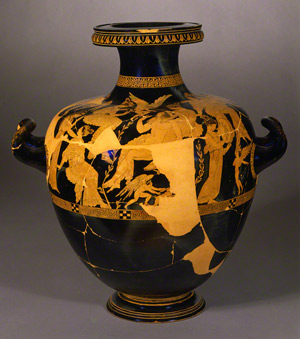 Water Jar with Aphrodite and Adonis, Greek, 425–400 B.C. Terracotta, 18 1/2 in. high. Museo Archeologico Nazionale di Firenze (Soprintendenza per i Beni Archeologici della Toscana). Reproduced with permission of the Ministry of Heritage and Culture. Superintendence for Archaeological Heritage of Tuscany

Aphrodite's mourning for her beloved Adonis—who died tragically young—was commemorated at sites throughout the Mediterranean during the Adonia festival. At Athens, it was celebrated by women only. In one of the rites, they planted quick-growing seedlings and then brought them up to the roofs of their houses, where the young shoots soon withered. This ritual re-enacted both Adonis's flourishing potential and his sudden death, allowing the devotees to emulate Aphrodite's experience.

This vase depicts Adonis before his death, reclining against Aphrodite in an idyllic setting that evokes the ease and abundance of the cult of Aphrodite en Kepois (in the Gardens).

The lovers are surrounded by Aphrodite's entourage of beautiful companions, each of whom is a personification, such as Eudaimonia (Prosperity) and Eutychia (Happiness) on the lower left. At bottom right, Pannychis (All night Feast) alludes to the evening rituals associated with the Adonia festival at Athens.

Although she is often perceived as having no connection with military matters, ancient literary sources preserve references to an armed Aphrodite as a cult statue at a number of sites. None of these survive, but intriguing finds from the Etruscan port of Gravisca offer positive evidence.

The two bronze figurines shown below depict a female wearing a helmet and brandishing a spear (now missing) in her raised right hand. Both were found in the shrine of Aphrodite at Gravisca and may depict the goddess. They were discovered with many other dedications by sailors and merchants. Aphrodite had power over the sea, and this may explain her importance at Gravisca, for she could provide smooth sailing for travelers. 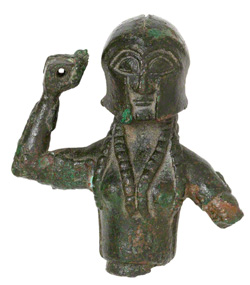 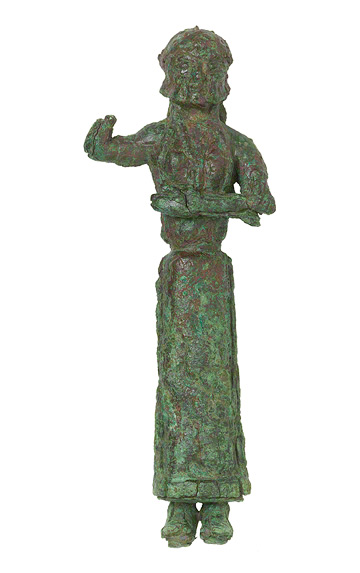