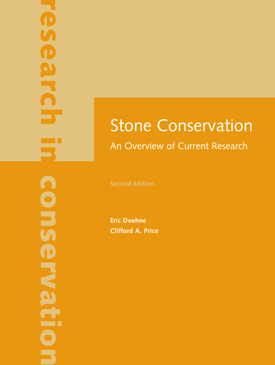 Petra, Angkor, Copan, Venice, Lascaux, Easter Island—all are examples of irreplaceable cultural heritage built in stone and now slowly disappearing. In 1996 the Getty Conservation Institute published Stone Conservation: An Overview of Current Research as a tool for conservators and conservation scientists to guide policy, practice, and research in the preservation of stone in monuments, sculpture, and archaeological sites.

This second edition reflects the explosion of new research, enlarging the discussion of preventive conservation and adding new sections on rock art and other subjects. It provides a strategic overview of the intervening fifteen years in stone conservation research and an updated critique of the field’s strengths and weaknesses. The accompanying bibliography summarizes material published between 1995 and 2009 and provides a framework for building a coherent base of useful knowledge for practicing conservators and scientists.

Eric Doehne holds a BS in geology from Haverford College (Pennsylvania) and MS and PhD degrees in geology from the University of California, Davis. He joined the Getty Conservation Institute in 1988 and worked there as a research scientist until 2010. Doehne’s projects included a wide range of research collaborations, including the desalination of historic masonry in New Orleans, the conservation of magnesian limestone buildings in Yorkshire, and coral-red gloss on Greek vases. In 2010 he founded Conservation Sciences, LLC—a consultancy focused on materials science for art, architecture, and archaeology. He specializes in consulting, teaching, and investigations about the composition, behavior, and treatment of such historic inorganic materials as stone, glass, and ceramics. Doehne’s particular interest is in stone decay mechanisms, for instance, the role of soluble salts in the deterioration of architecture, wall paintings, and sculpture.

Clifford Price is Emeritus Professor of Archaeological Conservation at University College London (UCL). He earned an MA and PhD in chemistry at St. Catharine�s College, Cambridge, and worked first at the Building Research Establishment. In 1983 he was appointed head of the Ancient Monuments Laboratory with English Heritage, and in 1990 he moved to the Institute of Archaeology, UCL. His research has been concerned primarily with the decay and conservation of stone. He has been involved in the conservation of several English cathedrals and has undertaken consultancies at sites around the world. He retired from UCL in 2007.