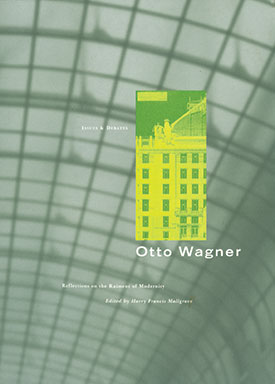 Otto Wagner: Reflections on the Raiment of Modernity

A traditionalist designer with imperial ambitions or an avant-garde general leading the charge of a modernist assault, a Secessionist architect with a penchant for iconography or a materialist proponent of realist values—Otto Wagner can be portrayed in many ways. As the ten essays in this volume argue, however, a more complete portrait is achieved when variant and seemingly contradictory aspects of his rich architectural and literary oeuvre are allowed to coexist and find their own historical balance. This book is focused less on the visually seductive aspects of Wagners creations than on the social, intellectual, and artistic framework within which the architect brought his works to fruition. The result is a broad but at the same time concentrated exploration of the parameters of Wagner’s tectonic expression—a canvas of a period in which the sensualist aesthetic tendencies of the late nineteenth century merged with the more sachliche vision of twentieth-century art.

Stanford Anderson has written and lectured widely on the historiography of modern architecture, urban planning, and ecology. He is head of the Department of Architecture at the Massachusetts Institute of Technology.

J. Duncan Berry focuses his studies on the architecture and theory of late historicism. He has held teaching positions in art and architectural history at Brown University, the School of Architecture at Roger Williams College, and the Rhode Island School of Design.

Iain Boyd Whyte is director of the Centre for Architectural History and Theory at the University of Edinburgh. His fields of study are nineteenth- and twentieth-century architectural history and theory with emphasis on Germany, Austria, and the Netherlands; aesthetics; film theory; and Anglo-German literary relations from 1700 to the present.

Peter Haiko has centered much of his scholarship on turn-of-the-century Viennese architecture, especially the work of Otto Wagner. He holds a professorship at the Institut für Kunstgeschichte of the Universität Wien.

Renata Kassal-Mikula is a senior curator at the Historisches Museum der Stadt Wien. She is also an authority on the work of Otto Wagner and on nineteenth-century Viennese architecture.

Ákos Moravánszky has published widely on Central European architecture of the twentieth century. Since 1991 he has taught architectural history at the Massachusetts Institute of Technology.

Fritz Neumeyer has written extensively on the history and theory of modern architecture. An architect, he holds the chair for architectural theory at the Technische Universit&aumlautt, Berlin.

Werner Oechslin teaches the history of art and architecture at the Eidgenössische Technische Hochschule in Zurich and is director of its Institute for History and Theory of Architecture.