This is the Day: The March on Washington
Photographs by Leonard Freed
Foreword by Julian Bond
Essay by Michael Eric Dyson
Afterword by Paul Farber

August 28, 1963, marked a great day for democracy in America. On that day nearly fifty years ago, more than 250,000 people gathered at the National Mall in Washington, DC, to mount a peaceful protest demanding equal rights and economic equality for African Americans. Led by a contingent of civil rights organizations, The March on Washington for Jobs and Freedom called for the desegregation of public schools, protection of the right to vote, and a federal program to train and place unemployed workers. This historic demonstration ultimately led to the passage of the Civil Rights Act of 1964 and soon became the iconic expression of social protest that inspired the women's rights movement, as well as movements for the disabled and other disenfranchised groups, and serves to this day as a blueprint for democratic action.

This Is the Day: The March on Washington, which will be published by Getty Publications in February 2013 to coincide with Black History Month and the 50th anniversary of the march, presents Magnum photographer Leonard Freed's powerful visual testimony of the event that culminated in Dr. Martin Luther King Jr.'s prophetic "I Have a Dream" speech, delivered at the base of the Lincoln Memorial. The 75 photographs in this powerful volume, most of them never before published, were chosen from hundreds of images Freed made in the nation's capital that day before, during, and after the march. These images present spectacular wide-angle views of the hundreds of thousands of marchers overflowing the National Mall, intimate group portraits of people straining to see the speakers, and tight close-ups of individual faces filled with hope and yearning, as epitomized by a young woman who throws her entire being into singing "We Shall Overcome." 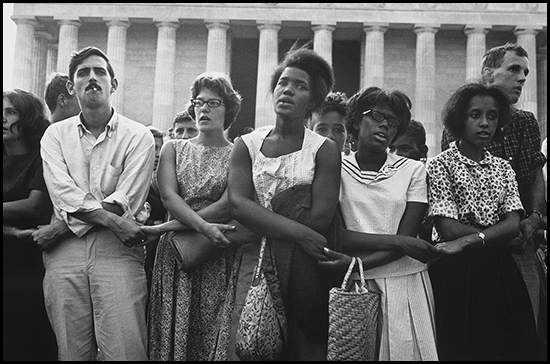 A Visionary Portrait of Democracy
Freed's images reveal the powerful impact of the march, which took place in the midst of the civil rights movement, when racial inequities were being most painfully exposed to the nation and the world. Freed's holistic approach to photographing the events of this historic day is revealed in the details he chose. In the hours before the march, he photographed the area surrounding the Mall as people arrived in buses and cars, protest signs were being stacked in preparation for distribution, policemen took up their posts, and people passed by the famed Ford Theatre, where a sign reads "House Where Lincoln Died." With the Washington Monument, the Reflecting Pool, and the Lincoln Memorial as his visual anchors, Freed photographed the massive crowd as it gathered and swelled, and then went in tight to capture groups of marchers chanting and singing in their Sunday-best clothes, a range of individual expressions, and the interplay of text and image on placards. He photographed late into the evening when the remaining marchers linked hands for a final rendition of "We Shall Overcome," as well as the aftermath when the crowds dispersed and the visual remains of this history-making event were reduced to placard scraps blanketing the ground.

Return Visits to Washington, DC
Freed would return to the National Mall numerous times to photograph other marches and rallies, including Vietnam War protests. In 1964 he photographed individual African Americans exercising their right to vote for the first time, and in the same year made an iconic photograph—reproduced in the book—of Dr. Martin Luther King Jr. being celebrated in a Baltimore motorcade after receiving the Nobel Peace Prize. This Is the Day also includes a selection of Freed's images from the 20th Anniversary March of 1983. These photographs, which reveal a more casual trend in American style and dress, from the dark suits and pearls of 1963 to T-shirts and shorts in 1983, show a youthful Jesse Jackson three months before he declared he would run for president and placards calling for President Reagan to cut the military budget.

The Legacy of Freedom Fighters
Freed was born in Brooklyn, New York on October 23, 1929, to a working-class Jewish family of Eastern European descent and strong social values. Working in Germany in the 1960s, Freed photographed a black soldier standing before the Berlin Wall and was struck by the realization that while this soldier was defending freedom in Europe, his brothers and sisters were fighting for their own freedom at home. This thought inspired him to return to the United States and produce a photo-essay examining the daily life of blacks across America, from the East Coast to the Deep South. His resulting photo-essay culminated in the book Black in White America, first published in 1967/68 and reissued in 2010 by Getty Publications. It was during the course of this project that Freed photographed the March on Washington. After Freed's death in 2006 his widow, Brigitte, was inspired to compile a book on the March on Washington from her late husband's archive when she heard then-Senator Barack Obama remark to an audience of civil rights activists, "I stand here because you walked."

Accompanying the photographs are a first-hand, backstage account of the preparations leading up to the march by civil rights activist and author Julian Bond; an introduction to the importance of the march and Dr. King's involvement, by sociology professor and author Michael Eric Dyson; and an informative discussion of Freed's approach to the photographic project by scholar Paul Farber. 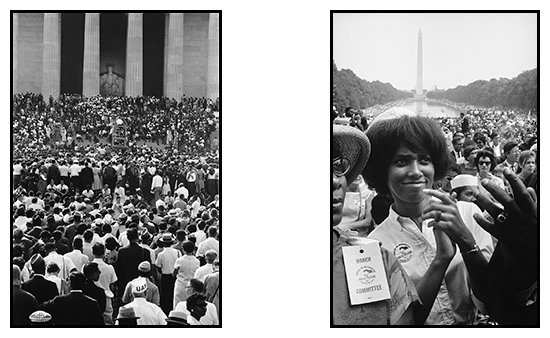 Julian Bond is a social activist and civil rights leader as well as a writer, teacher, and lecturer. While a student at Morehouse College in Atlanta, Georgia, during the early 1960s, he helped found the Student Nonviolent Coordinating Committee (SNCC). He was the first president of the Southern Poverty Law Center and was elected to both houses of the Georgia legislature, where he served a total of twenty years. He was chairman of the National Association for the Advancement of Colored People (NAACP) from 1998 to 2010 and is professor emeritus in the Department of History at the University of Virginia, Charlottesville.

Michael Eric Dyson is a widely published writer, media commentator, and professor of sociology at Georgetown University in Washington, DC. He is the author of sixteen books, including April 4, 1968: Martin Luther King, Jr.'s Death and How It Changed America and I May Not Get There With You: The True Martin Luther King, Jr.

In the U.S. and Canada

In the United Kingdom and Europe

In Asia and the Pacific Rim