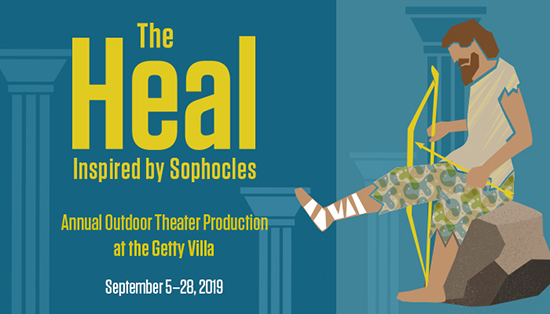 Running time is approximately 85 minutes, no intermission. Please be advised that The Heal contains adult language and is not suitable for children under 13.

A bold new version of Sophocles's timeless tale of hurting—and healing. The wounded Philoctetes (Phil) has suffered alone on a desert island for years, stranded there by Odysseus. But now Odysseus needs Phil's magic weapons to win the Trojan War and enlists Achilles's daughter Nia to help make peace. Director/adaptor Aaron Posner creates an irreverent, spiritual, musical exploration about the wounds we carry, the ones we cause, and the redeeming power of human connection. With music by Cliff Eberhardt and co-produced by Maryland's Round House Theatre.

"The Heal masterfully finds resonance in a classic... Not only is the journey rewarding – it's funny. Mr. Posner has a deep connection to his texts. While he's updating the story and making it modern and reverent – it's still a Greek tragedy and a surprisingly good one... You don't want to miss this one."
— Anthony Byrnes, KCRW

"Ironical and Imaginative... The evening belongs to Hissom, in a consummate performance."
— Deborah Klugman, Stage Raw

"The Heal is a howl, a sheer delight, from beginning to end... Posner's interpretation rings true and is thoroughly entertaining and dare I say enlightening from start to end."
— Ed Rampell, Hollywood Progressive

"The production is an overwhelming success."
— Melanie Kaminski, LA Explorer

"In comparison with the previous theater productions in this ongoing venture, The Heal certainly ranks amongst the best."
— Bondo Wyszpolski, Easy Reader News

About Round House Theatre
Round House Theatre is one of the leading professional theaters in the Washington, DC area, producing a season of new plays, modern classics, and musicals for more than 40,000 patrons each year at our theater in Bethesda. Round House has been nominated for more than 181 Helen Hayes Awards and has won over 32, including four Outstanding Resident Play Awards and the Charles MacArthur Award for Original New Play in 2016. Round House's lifelong learning and education programs serve over 4,000 students each year at its Education Center in Silver Spring and in schools throughout Montgomery County. Cornerstone programs include the year-round Teen Performance Company (which culminates in the student-produced Sarah Metzger Memorial Play), summer camp for students in grades K–12, and a full slate of classes for adults and youth.

In March 2018, the company launched the Full Circle Campaign to establish Round House as one of the leading regional theaters in the country through four inspiring goals: launch innovative artistic initiatives, advance theater to future generations, create a dynamic and flexible theater, and ensure our financial sustainability.

Among these new artistic initiatives are Equal Play, a groundbreaking program to commission 30 new plays from women playwrights and playwrights of color, including ten plays for the Teen Performance Company; Fair Play, which provides competitive artist salaries to build loyalty with the best local talent; and Round House's new Resident Artist program, which deepens the relationship with key artists through two-year residencies that guarantees each artist work on four productions, while engaging them year-round rather than on a per show basis, providing much needed job security.

One of Round House Theatre's deepest held values is to ensure our work is accessible to patrons of all ages, cultural backgrounds, economic groups, and physical ability. Through the Free Play program, Round House provides teenagers and college students with free tickets—to any play, any time—and removes financial obstacles while nurturing an interest in live, professional theatre. And in May 2019, the company launched On the House, a community ticket access program that provides complimentary group tickets to nonprofit organizations interested in sharing the enjoyment of live theater with their constituents. www.RoundHouseTheatre.org