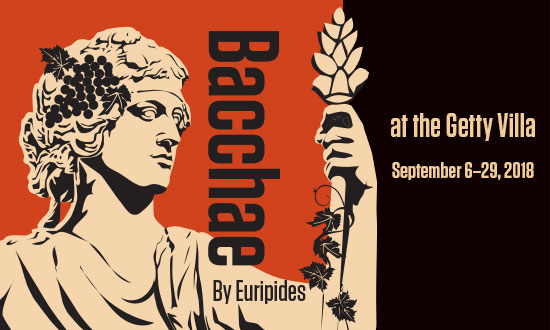 Running time is approximately 100 minutes, no intermission. This production is not recommended for persons under 12.


Packed with striking scenes, frenzied emotion, and choral songs of great power and beauty, Bacchae endures as one of Euripides's greatest surviving works. Dionysus, the god of wine, ritual madness, fertility, and theater, arrives in disguise at his birthplace in Greece. As revenge for a personal slight, he begins to spread his cult among the people of Thebes. His adversary King Pentheus, fearing the ensuing disorder, imprisons him to suppress his influence. This misguided attempt to thwart divine will leads to catastrophe for Pentheus and his entire family. The bacchants called Dionysus "the god of letting go," reminding us to respect our human wildness. Otherwise we may fall prey to the tyranny of excessive order or the chaos of collective passion.

Review: Euripides' 'Bacchae' is spellbinding in modern update at the Getty Villa
"Bogart has given us a 'Bacchae' that lights a path for future directors wanting to meet the treasury of ancient Greek theater on 21st century terms."
— Charles McNulty, LA Times

"What's so powerful about SITI and the Getty's approach to the Greeks is we get to simultaneously experience them and recognize their distance."
— Anthony Byrnes, KCRW

Anne Bogart (Director) is one of the three Co-Artistic Directors of the SITI Company, which she founded with Japanese director Tadashi Suzuki in 1992. She is a Professor at Columbia University where she runs the Graduate Directing Program. Works with SITI include Chess Match No. 5, Persians; Steel Hammer; Rite; Café Variations; Trojan Women (After Euripides); American Document; Antigone; Under Construction; Freshwater; Who Do You Think You Are; Radio Macbeth; Hotel Cassiopeia; Death and the Ploughman; La Dispute; Score; bobrauschenbergamerica; Room; War of the Worlds–the Radio Play; Cabin Pressure; Alice's Adventures; Culture of Desire; Bob; Going, Going, Gone; Small Lives/Big Dreams; The Medium; Noel Coward's Hay Fever and Private Lives; August Strindberg's Miss Julie; and Charles Mee's Orestes. Recent operas include: Handel's Alcina, Verdi's Macbeth, Bellini's Norma and Bizet's Carmen. She is the author of five books: A Director Prepares; The Viewpoints Book; And Then, You Act; Conversations with Anne, and What's the Story.

SITI Company was built on the bedrock of ensemble. We believe that through the practice of collaboration, a group of artists working together over time can have a significant impact upon both contemporary theater and the world at large. Through our performances, educational programs, and collaborations with other artists and thinkers, SITI Company will continue to challenge the status quo, train to achieve artistic excellence in every aspect of our work, and offer new ways of seeing and of being as both artists and as global citizens. SITI Company is committed to providing a gymnasium-for-the-soul where the interaction of art, artists, audiences and ideas inspire the possibility for change, optimism and hope.

Founded in 1992 by Anne Bogart, Tadashi Suzuki, and a group of likeminded artists, SITI Company began as an agreement to redefine and revitalize contemporary theater in the United States through an emphasis on international cultural exchange, training and collaboration. Originally envisioned as a summer institute in Saratoga Springs, New York, SITI expanded to encompass a year-round Season inclusive of touring, the creation of new work and running a biennial Conservatory program for 9 months of the year to cultivate the next generation of independent theater artists. Based in New York City, SITI continues to operate its international training program during its summer season in Saratoga. The Company is known nationally and internationally as a top-level artistic collective that generates groundbreaking theater.

In addition to Co-Artistic Directors Anne Bogart, Leon Ingulsrud and Ellen Lauren, SITI Company is comprised of eight actors, four designers and a playwright. The company represents a change in thinking about the relationships between artists and institutions. Offering performances from our varied repertoire, and workshops in the unique theater training we champion, SITI Company is dedicated to establishing long lasting relationships with theater presenters and their communities around the world.

Aaron Poochigian (Translator) earned a PhD in Classics from the University of Minnesota and an MFA in Poetry from Columbia University. His first book of poetry, The Cosmic Purr (Able Muse Press), was published in 2012 and, winner of the 2016 Able Muse Poetry Prize, his second book Manhattanite came out in December of 2017. His thriller in verse, Mr. Either/Or, was released by Etruscan Press in Fall of 2017. For his work in translation he was awarded a 2010-2011 Grant by the National Endowment for the Arts. His poetry has appeared in Best American Poetry, POETRY and The Times Literary Supplement.