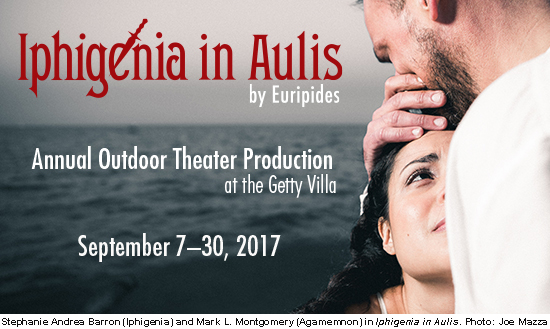 Running time is approximately 90 minutes, no intermission. This production is not recommended for persons under 12.

In Euripides's ancient tale of power and sacrifice, the Greek army lies stagnant on the shores of Aulis and King Agamemnon is faced with a heart-wrenching decision. In return for the winds that would carry his army to victory over Troy, the goddess Artemis has demanded the unthinkable: the sacrifice of the king's own daughter, Iphigenia.

"The chorus is a stunning quintet of singers in ocean-like ball gowns who alternately speak and harmonize their tale...Iphigenia in Aulis is a direct and honest attempt to mine the power of the Greeks and a brilliant excuse to spend a night outdoors in Malibu."
— Anthony Byrnes, KCRW

"While Greek tragedy can sometimes feel pedantic and melodramatic, Newell's Iphigenia is anything but. By turns sardonic, optimistic, and witty, the play provides a fresh perspective on an age-old story."
— Tony Frankel, StageandCinema.com

"Newell, who has been artistic director of Court Theatre since 1994, has directed Iphigenia with a firm, sure hand, making good use of the Getty's large, open space, and seeing that his cast (which was rounded out by Jim Ortleib as the Old Man and Michael Huftile as the despicable Menelaus) spoke the text in a clear, non-bombastic way."
— Willard Manus, TotalTheater.com

"There are perhaps few genres more likely to fill contemporary theatergoers with the fear of dozing off mid-play than the dreaded Greek Tragedy, that is unless the company putting on the show is Chicago's Court Theater, in town this month to resuscitate the 2400-year-old Iphigenia In Aulis to spellbinding, gut-punching effect at Malibu's Getty Villa."
— Steven Stanley, StageSceneLA.com

"Over the years we've seen many variations of a Greek chorus at the Getty Villa, and surely this has to be one of the most impressive...the purity and clarity of the human voice in this setting, and the presentness of being caught up in this wonderful production which can be likened to a sumptuous meal that we savor to the fullest extent possible...is there really anything better?"
— Bondo Wyszpolski, Easy Reader News

About Court Theatre
Established in 1955, Court Theatre is guided by its mission to discover the power of classic theater. Court endeavors to make a lasting contribution to American theater by expanding the canon of translations, adaptations, and classic texts. Court revives lost masterpieces, illuminates familiar texts, and distinguishes fresh, modern classics. It engages and inspires its audience by providing artistically distinguished productions, audience enrichment activities, and student educational experiences. Court Theatre is the professional theater in residence at the University of Chicago, continuing to discover the power of classic theater. It operates under an agreement between the League of Resident Theatres and Actors' Equity Association, the Union of Professional Actors and Stage Managers in the United States. Productions are made possible in part by a grant from the Illinois Arts Council, a state agency, and by a City Arts grant from the City of Chicago Department of Cultural Affairs. Court Theatre is a constituent of Theatre Communications Group, the national organization for the American Theatre; the League of Resident Theatres; the Illinois Humanities Council; the Arts Alliance Illinois; the League of Chicago Theatres; and Hyde Park Cultural Alliance.

Nicholas Rudall (Translator) is the Founding Artistic Director of Court Theatre, leading Court from 1971 to 1994. He led the growth of Court from a community theater to a leading professional Equity theater. In addition to his achievements as an actor and director, Rudall is a Professor Emeritus in Classics at the University of Chicago, where he taught for over forty years. His translations for the theater—known for their stage-friendly language and "playability"—are myriad and span many languages, but he is best known for his translations of ancient Greek tragedy. Beginning with this production of Iphigenia in Aulis by Euripides, Court has produced three translations by Rudall over three years, including a world premiere translation of Aeschylus' Agamemnon in 2015 and concluding with Sophocles' Electra in 2016.

Charles Newell (Artistic Director/Director) was awarded the 2013 SDCF Zelda Fichandler Award, "which recognizes an outstanding director or choreographer who is transforming the regional arts landscape through singular creativity and artistry in theater." Charlie has been Artistic Director of Court Theatre since 1994, where he has directed over 50 productions. He made his Chicago directorial debut in 1993 with The Triumph Of Love, which won the Joseph Jefferson Award for Best Production. Charlie's productions of Man of La Mancha and Caroline, Or Change have also won Best Production Jeffs. Other directorial highlights at Court include The Misanthrope, Tartuffe, Proof, Angels In America, An Iliad, Porgy & Bess, Three Tall Women, Titus Andronicus, Arcadia, Uncle Vanya, Raisin, The Glass Menagerie, Travesties, Who's Afraid of Virginia Woolf, The Invention of Love, and Hamlet. Charlie has also directed at Goodman Theatre (Rock 'n' Roll), Guthrie Theater (The History Cycle, Cymbeline), Arena Stage, John Houseman's The Acting Company (Staff Repertory Director), the California and Alabama Shakespeare Festivals, Juilliard, and New York University. He has served on the Board of TCG, as well as on several panels for the NEA. Opera directing credits include Marc Blitzstein's Regina (Lyric Opera of Chicago), Rigoletto (Opera Theatre of St. Louis), Don Giovanni and The Jewel Box (Chicago Opera Theater), and Carousel (Summer 2014, Glimmerglass Festival). Charlie was the recipient of the 1992 TCG Alan Schneider Director Award, and has been nominated for 16 Joseph Jefferson Director Awards, winning four times. In 2012, Charlie was honored by The League of Chicago Theatres with their Artistic Achievement Award.