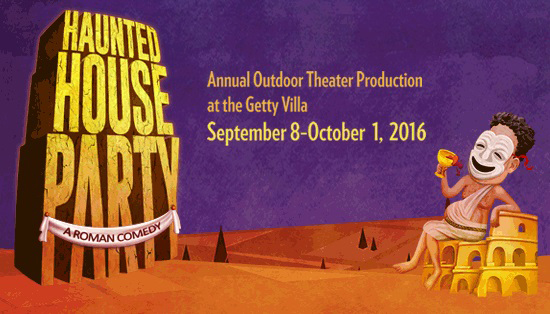 Running time is approximately 90 minutes, no intermission. This production is not recommended for persons under 12.

Haunted House Party is a hilarious Roman comedy based on Plautus's Mostellaria (about 200 B.C.) that would be right at home as a television sitcom premise today: When big daddy Theopropides is away, his son Philolaches will play! The lovesick youth has borrowed a large sum of money from a swindler to buy the freedom of a slave girl. When Theopropides returns sooner than expected, his slave Tranio is forced into some high-concept scheming to save the day.

Fraught with peril and laughs aplenty, this knockabout farce features the musical, comedic, circus style of the one and only Troubadour Theater Company (aka the Troubies). Evoking the spirit and improvisation of Roman traveling comedy troupes, the Troubies' classic blend of theatricality and mayhem is a must-see.

"Reviving ancient comedy is nearly as difficult as resuscitating a mummy, and this refurbished old property engenders an impressive quantity of hilarity."
— Charles McNulty, The Los Angeles Times

"Since its inception, the Getty Villa's outdoor Barbara and Lawrence Fleischman theater has been mostly devoted to tragedy. In Haunted House Party, it bore the mask of comedy just as proudly."
— Marc Haefele, KPCC

"When does something go from being an annual event to being a tradition, which people look forward to year after year? When the first theatrical production of ancient Greek and Roman plays was presented at the Getty Villa's outdoor amphitheater it seemed like a novelty at the time, but now it's something we can look forward to every September as summer wanes."
— Bondo Wyszpolski, Easy Reader News

"Every once in a great while I see a show full of so much inspired insanity and silliness that it makes me feel glad to be alive, if only to partake of such madcap merriment...The Troubadour Theater Company and Getty Museum's Haunted House Party, A Roman Comedy is such a sheer delight that it joins the rarefied ranks of plays I've seen that filled me with such an overwhelming sense of the joy of life..."
— Ed Rampell, Hollywood Progressive

"Roman party god Bacchus would look down fondly at the revelry taking place this fall at the Getty Villa Theater...The strength of this production lies in the talented cast, spontaneous ad libs, audience engagement, and the sassy verbal juxtaposition of the ancient and the modern."
— Leticia Marie Sanchez, Cultural Cocktail Hour

About Troubadour Theater Company
Troubadour Theater Company is a free-wheeling, no holds barred, Commedia Del Arte flavored, slapstick driven Los Angeles based ensemble of actors, musicians, and comedians that has been performing for audiences throughout Southern California and beyond since 1995. Their fast-paced, laugh-filled, loose adaptations (some of the lines are still there) of classic plays, literature and film, as well as their original productions make this company a unique and exciting experience for theater-goers of any age.

The Troubies, as they are affectionately called, have performed charitably for many causes including animal conservation, adult rehabilitation, AIDS awareness, California Literacy Night for LAUSD, children with autism and other youth programs. Troubadour members have professional experience as writers, directors, and performers for film, television, theater, orchestra, and circus.

In its adaptations of classic and modern content, Troubadour has combined the beauty of the text with diverse physicality and movement, comic routines, and musical numbers. Improvisation plays a large part as audience members are called upon to help erect the set, sing along, and even enlisted to play parts! Never the same show twice! In recent years the Troubies have put their spin on all genres of classic tales, such as A Midsummer Saturday Night's Fever Dream, Fleetwood MacBeth, Hamlet the Artist Formerly Known as Prince of Denmark and Frosty the Snow Manilow. And thanks to its commissions from the Getty Villa, the Troubies have branched out to the Roman and Greek classic plays most notable adapting and creating Oedipus the King, Mama (with music from Elvis) and ABBAmemnon (with music from Abba) for the Villa's Classical Lab Series.