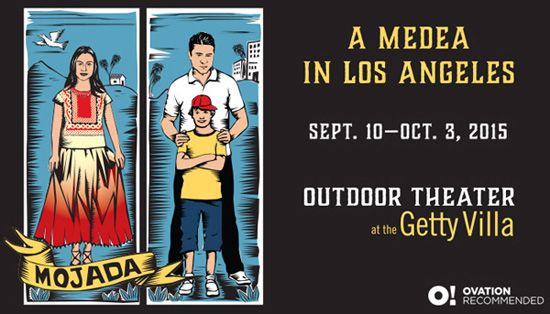 Mojada: A Medea in Los Angeles

From MacArthur Fellow and critically acclaimed author of Electricidad and Oedipus el Rey, Luis Alfaro's Mojada is a breathtaking reimagining of Euripides's Medea transported to East Los Angeles. In an epic journey of border crossings, Medea, a seamstress with extraordinary skill, runs from a past of betrayals. With husband Hason and their son in tow, our storied heroine's struggle to adapt takes a disastrous turn when old and new worlds meet in the City of Angels. Alfaro's gripping contemporary take on the ancient Greek myth tackles the complexities of family, tradition, culture, and the explosive moment when they all collide.

"It doesn't get much better than this!...brilliantly written...Set in modern day Los Angeles...skillfully directed...at the beautiful Getty Villa outdoor Amphitheatre. The casting could not have been better. Not a weak link in this immensely talented ensemble. This is MUST see theater in Los Angeles."
— Performing Arts Live

"This is a playwright who deeply cares for his characters and their culture, and in this sweeping rhythmic drama, he makes us care about them, too."
— Deborah Klugman, LA Weekly

About Luis Alfaro
Luis Alfaro is a native of downtown Los Angeles. Among his awards are MacArthur, Joyce, and Mellon Foundation fellowships. He is the playwright-in-residence at the Oregon Shakespeare Festival and a professor at the University of Southern California. His plays are regularly produced at The Magic Theatre in San Francisco, Victory Gardens Theatre in Chicago, and Playwrights Arena in Los Angeles.