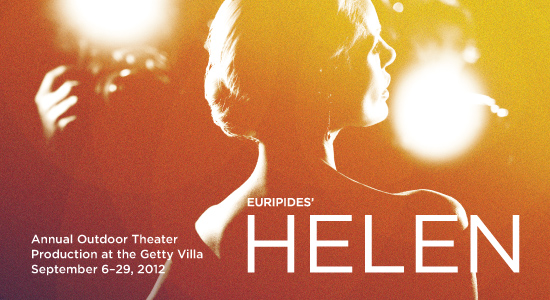 Each fall, this series features a classical tragedy or comedy in the Getty Villa's dramatic Barbara and Lawrence Fleischman Theater, an outdoor theater based on ancient prototypes.

Euripides, the most subversive of the great Greek dramatists, followed his Trojan Women just three years later by presenting an entirely alternative history of "Helen of Troy" in Helen (412 B.C.), a play now largely ignored and rarely performed.

In Helen, Euripides' heroine is no wanton seductress, but rather a pious, faithful wife and a hapless victim of Olympian plots who struggles to make the best of a very bad situation. By a trick of the gods, this Helen never travels to Troy at all, but is replaced by a phantom replica on the eve of her kidnapping by Paris. The real Queen Helen is magically transported by Hermes to the far off island of Pharos in a cloud for safekeeping, where she waits out the Trojan War in an ironic celibacy.

Helen picks up the story 17 years later, as the abandoned, middle-aged queen remains stranded on the island, oblivious to her infamy and ignorant of the war's outcome. As the play opens, the once-famous beauty wonders whether the gods, her husband, and the world have forgotten her forever. Needless to say, they have not, and Euripides' inventive fantasy of mistaken identities and impossible coincidences ensues.

Audiences and critics alike revel in this colorful production by director Jon Lawrence Rivera and Playwrights' Arena, set at the close of Hollywood's golden age.


"There are plenty of hearty laughs to be had in this contemporary version of a classic that asks us to relinquish our certainties and second-guess even our own senses."
— Los Angeles Times

"This is a spectacularly one-of-a-kind evening of theater . . . an experience to remember."
— Broadway World

"The production shows, once again, that the best, most varied, and riskiest theatre in America is taking place in Los Angeles these days."
— Cultural Weekly

"Playwright Nick Salamone has reimagined Helen for a contemporary, movie-savvy audience, taking vast liberties with the text in order to grant it a late-20th century Hollywood setting. Thus, instead of a dusty old slab of classic theater, we get a visually splendid romp."
— LA Weekly

Read and see more about the play on our blog, The Iris, including video interviews with the creative team.

The Cast
About the Artists

Nick Salamone (Playwright) is the author of ten full-length produced plays: Another House on Mercy Street, All Souls' Day, Riffs and Credos, Moscow, Red Hat and Tales, Whale Watchers, Hillary Agonistes, Gulls, Sea Change, and The Sonneteer. Salamone received the 2007 Playwrights' Arena Award for outstanding contribution to the Los Angeles theater community, two Beverly Press Maddy Awards for excellence in writing, an LA Weekly Award for adaptation, and three Garland Awards for Excellence in Southland Theater (one for adaptation and two for musical score). He was nominated for two LA Weekly Awards for playwriting and an Ovation Award for book and lyrics. His most recent work, The Sonneteer, was listed by the Los Angeles Times, LA Stage Times, and Entertainment Today as among the best new plays of 2011. For the production Moscow, Salamone received the Fringe First Award for new writing as well as the audience favorite award at the Edinburgh International Fringe Festival. He is an alumnus of Nautilus Music Theater workshop and graduated summa cum laude and Phi Beta Kappa from Tufts University with a bachelor of arts in English and drama.

Playwrights' Arena, under the leadership of artistic director Jon Lawrence Rivera, is dedicated to discovering, nurturing, and producing bold new works for the stage written exclusively by Los Angeles playwrights. It was founded in 1992 by Jon Lawrence Rivera and Steve Tyler. Playwrights' Arena develops new materials through several series of readings, workshops, and roundtable discussions. Local playwrights are encouraged to create original, adventurous, and daring materials to challenge the mind, touch the heart, and provoke the spirit.

Additional information about Playwrights' Arena can be found at www.playwrightsarena.org.