Mountain, Fire, Holding Still. is a durational performance/installation by dance artist taisha paggett and sound artist Yann Novak created in collaboration with visual artist Gregory Barnett and movement artist Marbles Jumbo Radio. Presented in the Outer Peristyle of the Getty Villa, it is a meditation on death, labor and blackness in antiquity as it relates to the contemporary body, and a performance- as-vigil for past and future lives.

The eruption of Mount Vesuvius in 79 A.D. buried the town of Herculaneum and other Roman cities in volcanic ash. This unique preservation catalyzed later archeological discovery and a fascination with the ancient past. paggett and Jumbo Radio translated the terms mountain, fire, and holding still into cues and elemental directives for a movement practice through their collaboration, which spanned Northern and Southern California. Responding to the Getty Villa (modeled after Herculaneum's Villa dei Papyri) as an architectural palimpsest containing layers of historical metaphor beneath its surface, the artists use the mountain as the basis of their movement practice and subsequent daylong performance score. Together, they seek to hold vigil for the precipices of power, death, and uprisings of our present day.

Novak layers a site-specific sound work into the performance through pairing altered field recordings of the Outer Peristyle with synthesized tones that bring focus to time as one of the critical materials of this work. Through this adornment of time, the sound work references the Roman Empire's relationship to the labor of production for both displaying wealth and honoring the dead, as seen in the meticulously crafted antiquities in the Getty Villa's galleries.

Mirroring the impossibilities of adequate preparation or closure in the face of destruction, Gregory Barnett created a sculptural weight from found materials for paggett to navigate during the performance. The formality of the structured tailoring of her garments draws from the technical and artistic prowess seen in ancient Greco-Roman funerary offerings, while the solid black palette represents the omnipresent ash of Mount Vesuvius post-eruption. 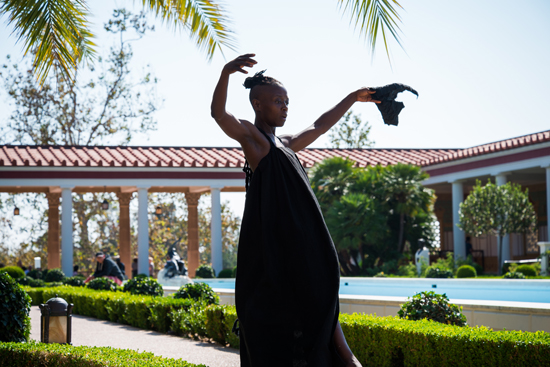 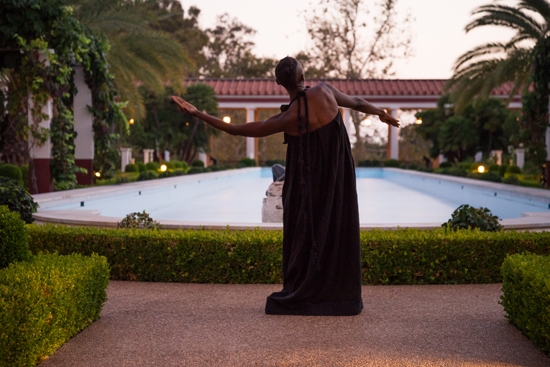 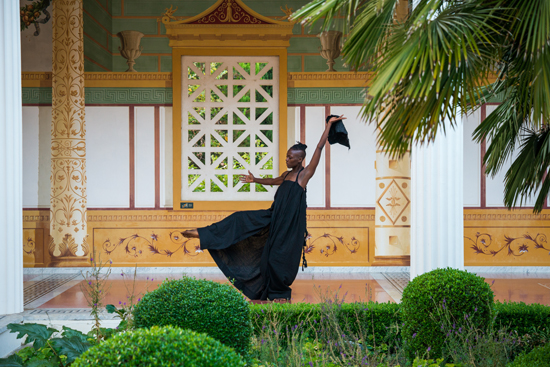 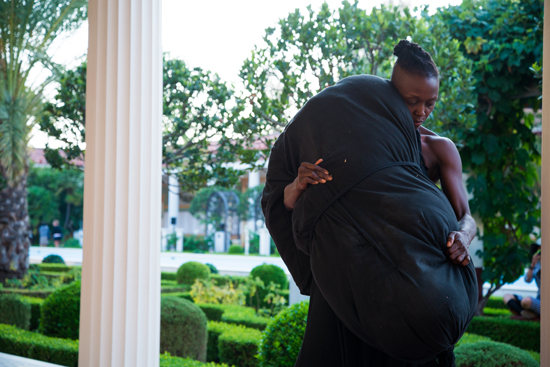 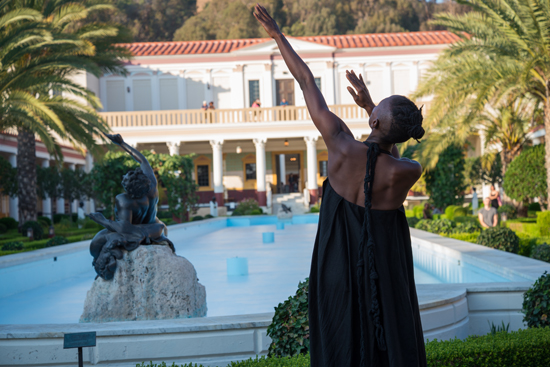 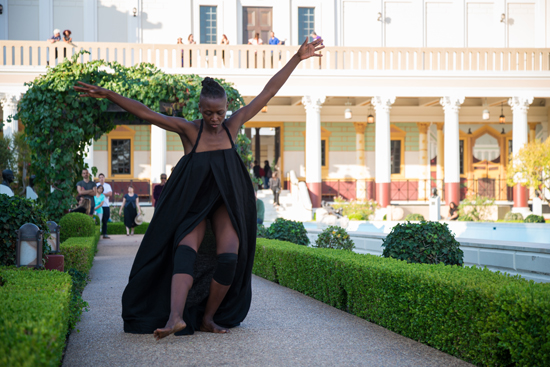 Learn More on The Getty Iris

"Reflections on Performance as Vigil" by Marbles Jumbo Radio (September 19, 2016)

taisha paggett is a Southern California-based queer Black artist whose individual and collaborative works for the stage, gallery and public space take up questions of the body, agency, and the phenomenology of race. paggett's work seeks to de-center and reframe certain Western choreographic conventions and the ways in which bodies and spaces become normalized in both dance practices and the actions of daily life, by colliding them with socio-political metaphors and meaning. paggett's work interrogates fixed notions and representations of Black and queer bodies through the construction of idiosyncratic structures and scores in which those subjects also become agents. paggett's work has been presented at Danspace (New York), De brillator (Chicago), Commonwealth & Council (Los Angeles), LACE (Los Angeles), the Whitney Museum (NYC), the Doris McCarthy Gallery (Toronto), The Studio Museum in Harlem, and Diverseworks (Houston), among other sites. As a dancer, paggett currently works with Every House Has a Door, Meg Wolfe, and with Ashley Hunt through their ongoing collaborative project, On movement, thought and politics. In previous years, paggett has done extensive dance work with David Rousseve/REALITY, Victoria Marks, Kelly Nipper, and Stanley Love Performance Group, among others. Project support has come through the generosity of programs including Choreographers in Mentorship Exchange (CHIME), University of California Institute for Research in the Arts (UCIRA), the Headlands, National Performance Network (NPN), Clockshop, and the Multi-Arts Production Fund (MAP) in conjunction with LACE, among others. paggett teaches in the Dance department at UC Riverside, holds an MFA from UCLA's World Arts and Cultures/Dance program, and was a co-instigator of the LA-based dance journal project and discursive platform, itch.
www.taishapaggett.net | www.schoolforthemovement.com

Yann Novak is a sound and visual artist living and working in Los Angeles. Through the use of sound, light and space, he explores how these intangible materials can act as catalysts to focus our awareness on the present moment and alter our perception of time. Novak's work, whether conceptual or rooted in phenomenon, are informed by his investigations of presence, stillness and mindfulness. Novak has presented his installation work at Armory Center for the Arts, Pasadena; The Broad, Los Angeles; Commonwealth & Council, Los Angeles; The Henry Art Gallery, Seattle; Las Cienegas Projects, Los Angeles; Lawrimore Project, Seattle; Modern Art Museum of Medellín, Medelliín; SFMoMA, San Francisco; Soundfjord, London; and Tanya Bonakdar Gallery, NewYork, among others. His performance works have been experienced at the AxS Festival, Pasadena; Decibel Festival, Seattle; Forward Festival, Washington; Hammer Museum, Los Angeles; Human Resources, Los Angeles; LACMA, Los Angeles; Mutek Festival, Montreal; Norton Simon Museum, Pasadena; Oboro, Montreal; Resonant Forms Festival, Los Angeles; and The Stone, New York, among others. www.yannnovak.com

Marbles Jumbo Radio re-constellates the queer body from the margins to the center through dance, physical practice and discussion-based platforms that engage with the politics of place, belonging, and embodiment. They are a CHIME grant recipient, and with mentor Simone Forti, created the performance practice Ice Bergs (2007-2009). Marbles's recent collaborations include performance for Meg Wolfe's New Faithful Disco, Andrea Geyer's video installation Truly Spun Never and Johanna Breiding's installation, We Love Our Parents, We Fear Snakes, along with sound artist Yann Novak. Central to their work is responding to the needs of genderqueer and trans identified people of color, which has included co-facilitating trainings with Fresh! White in the Bay Area, the woods and studio project with taisha paggett in conjunction with Pieter in Los Angeles, and their upcoming workshop, Wrecking Walden, as part of the SEEDS festival at Earthdance in Massachusetts.

Gregory Barnett is an interdisciplinary performing and visual artist based in Los Angeles. His recent work includes A Home For Wayward Satyrs, at The Geffen Contemporary at MOCA; Edenic Idyllic: I Can Take You To Heaven, Let Me Take You To Heaven, a series of interactive performances based on the adolescent game "Seven Minutes In Heaven" at ArtWorks Theatre; If This Were Any More Camp You Would Need A Tent/ This Is What I Want/ Our Technicolor Dream Dance, a VistaVision-inspired public-use dreamscape park at Human Resources; and Thrust Into A Better You, a durational gyration score centered around sweat soaking the crafted sheepskin panel it was executed on at the Hammer Museum. Gregory is known for his employment of encoded imagery via costume and prop. Blending historically accurate referencing with visual poeticism, these objects work to frame the non-linear narratives immanent in art making. In addition to his own projects, Gregory has created tangible elements for various artists including choreographer Meg Wolfe, Ann Magnuson, award-winning burlesque performer Diamondback Annie, RuPaul, and Lady Gaga.