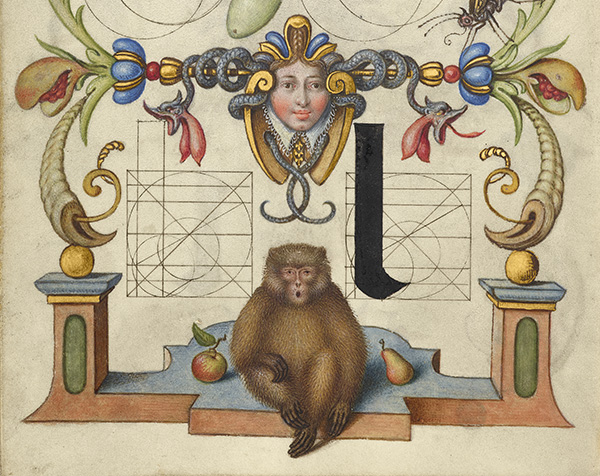 Because it's almost spring: a book bursting with nature

The exquisite Renaissance manuscript Mira Calligraphiae Monumenta, or Monument of Miraculous Calligraphy, is the result of a unique partnership between two different artists. From 1561 to 1562 the master calligrapher Georg Bocskay created a book with hundreds of scripts in many different languages and alphabets, and more than 15 years after Bocskay's death, the artist Joris Hoefnagel illuminated the pages with lifelike and wondrous illustrations of plants and insects from around the world.

Listen to the podcast »

In the late 1970s artist Anne Gauldin created the "Breast Dress"—a pink waitress uniform adorned with 13 latex breasts molded from friends' bodies. The dress is now a much-discussed piece of feminist history, having ties through Gauldin to the Waitresses, a performance art group, and to the Woman's Building, an epicenter of feminist art in the 1970s. The dress is also in the Getty Research Institute's special collections, and conservator Rachel Rivenc and team are in the midst of conserving it. "It's such a quirky and interesting object," Rivenc says. "And one that tells a really great story."

Getty staffer Julie Jaskol has made it part of her daily pandemic routine to take a neighborhood walk with her husband. "But we felt like we were wearing a groove along too-familiar sidewalks," she recalls. Desperately seeking new areas to explore, she consulted the website HistoricPlacesLA and learned about Vermont Knolls, a neighborhood founded in 1928 featuring colorful storybook houses. HistoricPlacesLA, the first online system to inventory, map, and describe L.A.'s significant cultural resources, has since led Jaskol to many more delightful places.

The Black gondoliers of Renaissance Venice

The painting Miracle of the Relic of the Cross at the Rialto Bridge by Vittore Carpaccio is one of the most fascinating depictions of contemporary life in Renaissance Venice. It also affirms that Black African men frequently worked as gondoliers, since boats were the most common way of getting around the city. As curator Davide Gasparotto tells us, those Black men might not have been servants or enslaved workers, as was common then, but instead, freed men who had become professional boatmen.