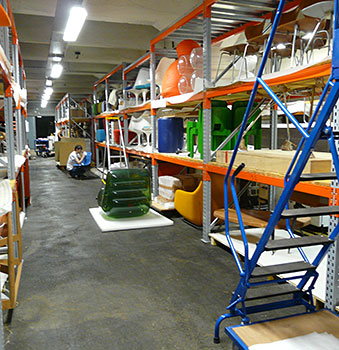 Plastics can be degraded by many factors, including light, ultraviolet radiation, oxygen, water, heat, and pollutants. The pollutants can come from the atmosphere, sticky fingers, or storage and packaging materials that outgas acids.1 Since many plastics collections spend most of their existence in storage rather than in exhibition, an effective conservation strategy can be based on slowing degradation while objects are stored. Such a strategy seeks to slow degradation by minimizing exposure to as many degradation factors as possible and by providing stable environmental conditions. The advantage of such a strategy for objects in storage is that no compromises need be made for human comfort or viewing, as would be the case under exhibition conditions. Consequently, temperature and light levels can be set with only the physical stability of the plastic in mind.

Since there are no international standards for storage environments for plastics, it is not uncommon for museums to apply those used to preserve both works of art on paper and other fragile organic materials: stable relative humidity (RH) maintained at around 50%, temperature of 18°C–20°C, light levels that are often zero and with a maximum of 50–100 lux, and the complete elimination of ultraviolet radiation.

Since the causes of degradation of the fifty best-known types of plastics are not identical, it is important to identify specific causes before defining the best storage conditions for individual plastic objects or artworks. For example, a plastic such as polyester that is prone to degradation by reacting with water (a process known as hydrolysis) would benefit greatly from being stored at a lower RH than those that degrade mainly by oxidation, such as polyethylene. In contrast, a plastic that is plasticized by water vapor, such as casein formaldehyde, would benefit from a higher RH, which would prevent cracking.

In many museum storage facilities, objects are grouped by historical period rather than material type. Macroclimates are therefore a compromise between the average requirements for all the materials in the location and the resources available. Although microclimates tailored to suit each plastic type would be optimal, costs often preclude them.

Much attention has been given recently to the use of adsorbents. They slow the degradation of plastics by adsorbing either gases that initiate degradation or those that accelerate breakdown. Activated carbon, silica gel, and zeolites are the most frequently utilized adsorbents in museums. They are used commercially in cooker hoods, gas masks, and shoe insoles to remove odors; in foodstuffs to remove moisture; and in detergents to soften water. An adsorbent can be installed in a filter system or simply placed in a paper envelope inside a storage box holding a single object.

Because degradation often involves reaction with oxygen, the removal of oxygen is generally believed to limit breakdown. However, to date, only the crazing rate of natural rubber has been investigated in oxygen-free microclimates. Enclosing objects in nitrogen is the traditional method to exclude oxygen, but to be effective this method requires a perfect barrier to prevent the ingress of air. A more convenient option has been adapted from the food industry by conservators. Ageless and Atco, which adsorb oxygen, are among several similar commercial products designed to inhibit the oxidation or spoiling of meats and bread during transport. They consist of gas-permeable plastic sachets containing iron particles, which bind the oxygen by forming iron oxides in the same way that metal cars rust. Sufficient water is provided by potassium chloride in the sachet. Ageless reduces the oxygen concentration of an airtight container to 0.01% or less.

Objects can be enclosed in oxygen-impermeable transparent bags composed of Escal, a ceramic-coated plastic film, together with oxygen adsorbers; any remaining oxygen is removed by flushing bags with nitrogen before heat-sealing. In 1991 around fifty objects from the British Museum's collections—including catapults, rubber toys, sandals, and balloons—were enclosed with oxygen adsorbers.2 Fifteen years later, visual examination and optical microscopy suggested that with the exception of objects enclosed in bags deliberately or inadvertently opened, the condition of the objects had remained almost unchanged. The study concluded that oxygen adsorbent sachets require replacement every five years because it is impossible to prevent the slow leakage of air even when bags are well sealed.

Activated carbon—which is used to filter toxic gases in gas masks and cooking smells in kitchen extractor hoods—has been utilized by museums since the 1990s to inhibit the degradation of cellulose nitrate objects. It is produced by treating wood, vegetables, coconut shells, or coal with heat or chemicals to remove volatile elements, and it has an enormous surface area. One teaspoonful of activated carbon pellets would occupy the same surface area as five soccer fields if each pellet were cut open and spread out. Activated carbon readily adsorbs organic molecules but not water. It adsorbs nitrogen oxides, the primary degradation product of cellulose nitrate, preventing those oxides from participating in autocatalytic breakdown or from corroding metals. When all the pores of the active carbon are filled, no further adsorption is possible. Because activated carbon is black and doesn't change color with an alteration in chemistry, it is not possible to see whether its adsorption capability is exhausted. It should therefore either be replaced with new activated carbon or be regenerated regularly by heating to 650ºC.

Cellulose acetate was used between 1910 and the 1960s to produce movie film, spectacle frames, Lego bricks, and artworks. It degrades both by losing plasticizer and by hydrolysis, and it forms acetic acid in a process known as the "vinegar syndrome." Movie film in advanced stages of degradation can generate up to 1.5 teaspoons (about 2 mL) of acetic acid per foot (0.3 m). Degradation rates double if acetic acid is not removed from the vicinity of the object and the pH reaches 4.6. Cellulose acetate objects are often stored with adsorbents, which remove water vapor and acetic acid. The ability of adsorbents to interact with the degradation pathways of this plastic was researched by the author while a GCI scholar in 2012. The effectiveness of silica gel, activated carbon, zeolite 4 Å, and archival cardboard boxes to slow breakdown was determined by identifying and quantifying adsorbed material after exposure to undegraded and degraded cellulose acetate.

Silica gel sachets bearing the message "do not eat" are often added to packets of cookies or crackers to keep them dry during transport to supermarkets. Silica gel (silicon dioxide) is used in museums to control RH by adsorbing water. It can also adsorb formaldehyde and acetic acid. Water and pollutants attach to silica gel molecules by physical bonds, which can be broken or reversed on heating. Zeolites are another family of adsorbents used in conservation. They are porous crystals designed with a well-defined pore diameter. A zeolite with a pore diameter of 4 Å (4 × 10-10 m) cannot trap molecules larger than that. Because water and acetic acid molecules have a diameter of 4 Å, zeolites can be used to trap them and thereby slow the deterioration of cellulose acetate. However, the author found that plasticizers in cellulose acetate can also be trapped by zeolites. When plasticizer is adsorbed, there is an increased risk of cellulose acetate shrinkage.

The author's research suggests that in general, conservation adsorbents have limited effectiveness and become exhausted by adsorbing a wide spectrum of pollutants instead of just one. Archival cardboard boxes for storing cellulose acetate objects may be more effective for slowing degradation than are conservation adsorbents; however, further research on this subject is necessary.

In the same way that food is stored in a freezer to prolong its life by slowing degradation or spoilage, plastics storage at temperatures below –20°C has been proposed as a low-cost, maintenance- free technique for slowing the degradation rate. Cooling by 10°C halves the rate of all chemical reactions. Some physical degradation processes are also inhibited by cold storage. Reducing the storage temperature from ambient to that of an ordinary food freezer (–20°C) reduces the migration of plasticizer from polyvinyl chloride (PVC) more than tenfold.

A cellulose nitrate ruler from the 1920s displaying typical hydrolytic breakdown. The ruler is badly cracked and produces nitric acid as a degradation product. Photo: National Museum of Denmark.

Plastics materials exhibit both reversible changes, such as shrinking and stiffening, and irreversible changes, including chemical changes, on cooling. They contract or shrink considerably more than other materials found in museum collections such as metals, ceramics, and glass. A copper pipe will shrink by 0.01% if the temperature is reduced by 10°C. Under the same conditions, a highdensity polyethylene pipe shrinks by 0.07%, and polypropylene and rigid PVC pipes shrink by 0.04%. Although shrinkage of plastics is unavoidable on cooling, it is reversible on warming to room temperature. Shrinkage by cooling has greater impact on composites— objects that comprise several materials in close contact. As a composite is cooled, each material will shrink independently but may then be restricted by the others.

Additionally, the influence of the accompanying reduction in moisture content of cold air surrounding plastic material must be considered. A temperature difference of 6°C–10°C between a plastic and its storage container should be maintained to avoid condensation. This can be achieved by surrounding the plastic with insulation material such as foamed polystyrene chips. Many plastics are permanently damaged by contact with water from condensation. To reduce the risk of water damage, thinwalled plastics may be safely stored in a freezer, protected only by a closed polyethylene bag. Thicker materials require gradual cooling by moving them from ambient temperature to a cooled room—to a refrigerator and then to a freezer. The reverse order of movement should be followed on rewarming.

There is not a single storage strategy that is ideal for every plastic. The plastic type and its behavior on degradation must be considered. However, all plastics will benefit from reduced light levels during storage and display; therefore, they should all be stored in the dark. Furthermore, storing plastics below room temperature—for example, in an ordinary food freezer that operates at around–20°C—will slow all chemical degradation reactions and thereby slow the rate of breakdown for many plastics in museums at a relatively low cost. The effectiveness of conservation adsorbents in slowing the rate of degradation of plastics by removing either materials that cause breakdown or acidic gases that accelerate the process remains uncertain and requires further research.

Yvonne Shashoua is a senior researcher in the Department of Conservation, National Museum of Denmark, where she researches the degradation and conservation of plastics objects and artworks.