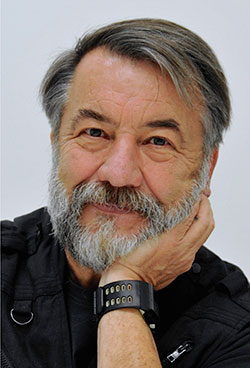 Dusan Stulik, a senior scientist with the GCI, retired in January 2014, after a quarter century with the Institute.

In 1988 he joined the GCI, first as head of the analytical section of Science. In later years, he served for a time as deputy head and acting head of Science. Early on, he was involved in a number of research areas, including binding media, environmental research, environmental monitoring, adobe consolidation, and gels cleaning research. Beginning in 1992, he was instrumental in the development and implementation of the GCI's collaborative project with the Office of the President of the Czech Republic to develop and apply an appropriate system of protection for the fourteenth-century glass mosaic on the south facade of St. Vitus Cathedral in Prague Castle, a project that lasted over a decade. For his research relating to the conservation of the mosaic, he was awarded the Medal of Merit from the President of the Czech Republic, and together with the project team he won the Engineering Academy Prize in 2000, presented by the Engineering Academy of the Czech Republic.

In more recent years, Dusan was the project manager of the GCI's Research on the Conservation of Photographs project, which has focused on the application of modern scientific and analytical methodologies for identification and characterization of photographs and photographic material. Project highlights included the 2002 collaboration with the Harry Ransom Center at the University of Texas at Austin on the scientific analysis of Joseph Nicéphore Niépce's View from the Window at Le Gras (1826), the first example of a permanent image created by exposing a photosensitive plate in a camera-like device. Later work included collaboration with the National Media Museum in Bradford, United Kingdom, where, under Dusan's lead, the GCI team worked closely with museum curators to solve a number of photograph identification puzzles presented by some important historic prints in the collection.

A recent accomplishment of the project was the 2013 release of eleven volumes of the Atlas of Analytical Signatures of Photographic Process, which documents the chemical fingerprint of known, and some previously unknown, means of making photographs. This information will aid conservators, curators, and scientists in understanding the kind of photographs in their collections, which in turn can aid in their conservation (the Atlas is available on the GCI website at no charge).

Dusan's considerable impact on the field was recognized in 2011 when he was awarded the Royal Photographic Society's Colin Ford Award, given annually to honor individuals who have made a significant contribution to photographic curatorship. As a senior member of GCI Science since its early years, Dusan has also had considerable impact on the work of the Institute. His vast expertise and equally vast enthusiasm for conservation will be missed.