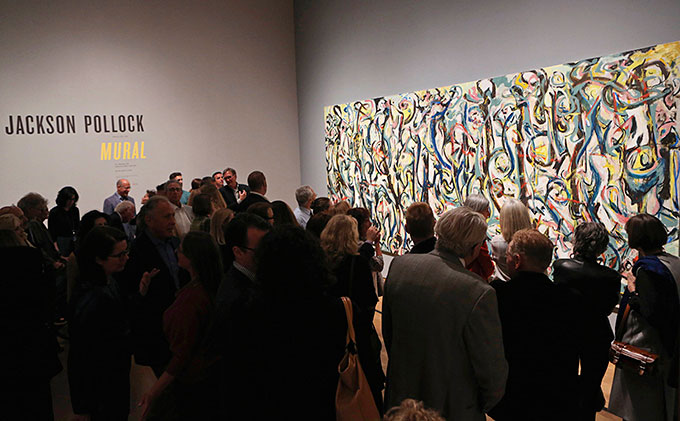 On view at the Getty Center through June 1, 2014, is an exhibition focused on Mural, Jackson Pollock's seminal work from 1943. The exhibit draws on findings from a two-year project of conservation and research by the GCI and the J. Paul Getty Museum.

Mural, which is owned by the University of Iowa Museum of Art, is featured in its own gallery, alongside a second gallery where the materials and techniques used to create the painting are examined and some of the legends surrounding it are explored. The changes in the painting since its 1943 creation and its recent conservation treatment at the Getty are also detailed.

Scientific research undertaken by the GCI confirmed that high-quality artists' oils were used on most of the work, but the study also identified a water-based white casein house paint that Pollock used in numerous places across the canvas, possibly to quickly regain areas of white space in places already painted.

Although the idea that Mural was completed in one painting session has long been disproved, the Getty study found that Pollock's initial paint marks were made in four highly diluted colors applied wet-in-wet across much of the canvas, suggesting that Pollock did perhaps complete an initial composition in a single session.

Pollock's application techniques were also explored, especially for a stringy, pink oil paint with an appearance similar to that of the enamel house paints used in his later works for pouring onto a canvas on the floor.

The recent conservation treatment removed a synthetic varnish that had been applied during a treatment in 1973 and addressed the effect that a wax-resin lining had on the current appearance of the painting. Whereas the lining successfully mitigated a long history of flaking, it also locked in place a sag in the canvas, resulting in a misalignment of the painted image with its rectangular stretcher. As part of the Getty treatment, the stretcher was replaced with one that followed the existing painted edges, thereby returning all areas of unpainted canvas to the sides of the stretcher and reestablishing the original edges of Pollock's work.

The research and analysis can be found in detail in the related illustrated book, Jackson Pollock's Mural: The Transitional Moment, available at shop.getty.edu. Also available for online viewing are three short videos created for the exhibition. Watch them on the GCI's YouTube channel.