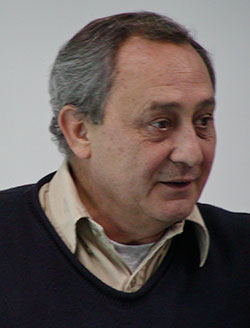 Alejandro Alva, a pioneering conservation architect and valued colleague of the Getty Conservation Institute, passed away in March 2014 after a brief illness. An innovative thinker and inspiring teacher, Alejandro profoundly influenced the study and conservation of earthen architecture and trained a generation of professionals who continue to advance this important field. He had a significant impact on the professional lives of many at the GCI and collaborated with the Institute for a number of years.

Alejandro was born in Peru and educated as an architect in Lima. After working in the Andean region of Puno, he attended the ICCROM Architectural Conservation Course (ARC) in Rome in 1978, an event that changed his life. He subsequently spent more than twenty-five years at ICCROM, appointed first as the ARC course assistant, and he eventually became the director of the Architecture and Archaeological Sites Unit. In that time, he brought substantive change to many aspects of training in architectural conservation, but his most important contributions were in the approach to the conservation of earthen building materials and technologies.

Long before it was commonplace, Alejandro recognized the critical connection between conservation and development—the need to preserve both the earthen architectural heritage and the building tradition that created it. In 1984 this vision led him to an association with CRATerre, the International Centre for Earth Construction in Grenoble, France, and to a series of courses on the Preservation of Earthen Architecture (PAT) in Grenoble that were characterized by strong team teaching, a fundamental connection between theory and practice, and an emphasis on critical thinking. In the mid-1990s, striving to build on this approach by adapting the PAT curriculum to a regional, site-based program, Alejandro sought collaboration with the GCI, which had been working in earthen architecture conservation since its early days. The resulting three-way partnership among ICCROM, CRATerre, and the GCI evolved into the Terra project, a model of interdisciplinary collaboration that strengthened capacity and advanced knowledge in earthen architecture for nearly a decade. Among Terra's most important accomplishments were two pan-American PAT courses, hosted at the archaeological site of Chan Chan in Trujillo, Peru, in 1996 and 1999. The didactic materials and pedagogy developed for these courses have provided a basis for the teaching of earthen architecture conservation on an international level ever since. Through these and other activities, the Terra project also created a strong community of practitioner-educators who are now training the next generation.

Alejandro was a creative and passionate conservation professional who played a fundamental role in promoting our earthen architectural heritage and in developing better ways to conserve it. He was an extraordinary teacher who not only provided his students with professional competence but convinced them that they could make a difference. A private person with a keen imagination and a love of music, Alejandro leaves behind a significant legacy in his writings and the professional community he helped to create. He will be warmly remembered as a colleague, friend, and mentor by many at the GCI and sorely missed by all those who had the privilege of knowing him.