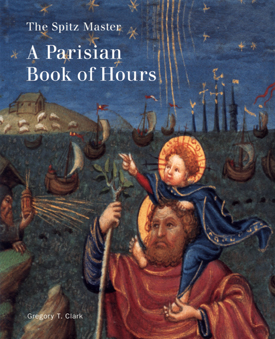 The Spitz Master: A Parisian Book of Hours

The Spitz Hours is one of the Getty’s finest French books of hours. It is also one of the most original and inventive manuscripts in the International style. In new art-historical research Gregory Clark places this book’s vivid, even witty imagery in the turbulent context of Parisian culture around 1420. The Spitz Master, its primary illuminator, allows the narrative of the miniatures to spill into the borders, bringing its pages alive in a fresh and engaging manner.

This is the first study devoted entirely to the manuscript and reproduces all the book’s glowing miniatures in full color. It will serve as a lively introduction to the Spitz Hours for scholars and the general public alike. In addition to shedding new light on the role of late medieval Paris as an international center for the making, illustrating, and marketing of books, the study positions the Spitz Hours in the larger context of late medieval culture as a whole.

The Spitz Master: A Parisian Book of Hours is the second volume in the Getty Museum Studies on Art series to treat an illuminated manuscript. The series is designed to introduce individual artworks or small groups of related works to a broad public with an interest in the history of art. Each monograph is written by a leading scholar and features a close discussion of its subject as well as a detailed analysis of the broader historical and cultural context in which the work was created.

Gregory T. Clark is professor of art history at the University of the South in Sewanee, Tennessee. He is the author of numerous studies of French and Flemish manuscript illumination of the fifteenth century, including most recently The Hours of Isabella Católica: The Facsimile Edition (1997) and Made in Flanders: The Master of the Ghent Privileges and Manuscript Painting in the Southern Netherlands in the Time of Philip the Good (2000).