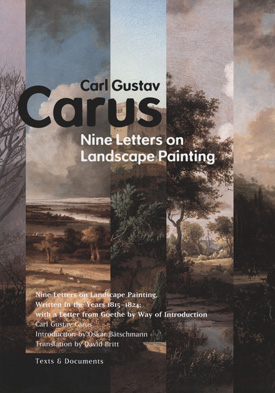 Nine Letters on Landscape Painting: Written in the Years 1815–1824; with a Letter from Goethe by Way of Introduction

Carl Gustav Carus (1789–1869), court physician to the king of Saxony, was a naturalist, amateur painter, and theoretician of landscape painting. His Nine Letters on Landscape Painting is an important document of early German romanticism and an elegant appeal for the integration of art and science. Carus was inspired by and had contacts with the greatest German intellectuals of his day. Carus prefaced his work with a letter from his correspondence with Johann Wolfgang von Goethe, who was his primary mentor in both science and art. His writings also reflect, however, the influence of the German natural philosopher Friedrich Wilhelm Joseph Schelling, especially Schelling’s notion of a world soul, and the writings of the naturalist and explorer Alexander von Humboldt. Carus played a role in the revolution in landscape painting taking place in Saxony around Caspar David Friedrich. The first edition appears here in English for the first time. Introduction by Oskar Bätschmann, translation by David Britt

Carl Gustav Carus (1789–1869), court physician to the king of Saxony, was a naturalist, amateur painter, and theoretician of landscape painting.

Oskar Bätschmann is professor of art history at the Universität Bern, Switzerland, and the author of The Artist in the Modern World.