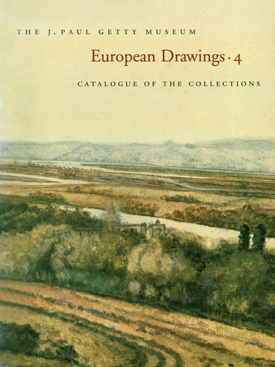 European Drawings 4: Catalogue of the Collections

The collection of drawings at the Getty Museum was started in 1981 with the purchase of Rembrandt’s Nude Woman with a Snake and has steadily expanded since then, so that now, at the turn of the new millennium, it stands at more than six hundred drawings and is, sheet for sheet, one of the best anywhere.

The Getty goal is to create from the finest examples a collection of the different Western European schools of drawing before 1900, with special emphasis on the work of the most important and accomplished draftsmen. The collection now contains superb examples of the work of Leonardo da Vinci, Raphael, Michelangelo, Dürer, Rembrandt, Claude Lorraine, Watteau, Gainsborough, David, Millet, Manet, Van Gogh, and Degas.

This is the fourth in the series of catalogues describing the drawings in the Getty Museum. Most of the drawings discussed in the present volume were chosen for the collection in the period of 1994 to 1998 and include examples from the Italian, German, Dutch and Flemish, French, Spanish, and British schools. Also included are several gifts from private collectors, which mark the start of a tradition that, it is hoped, will continue in the future. The catalogue entries for these new acquisitions are organized first by national school and then by artist. The book also includes a bibliography and indexes of artists, former owners, related drawings, prints, and works in other media.