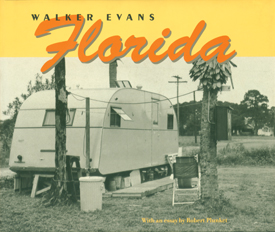 American photographer Walker Evans (1903–1975) is best known for his portraits of Depression-era America, a number of which were included in Let Us Now Praise Famous Men (1941), his famous collaboration with writer James Agee. In 1942, at the behest of retired journalist Karl Bickel, Evans journeyed to Sarasota to take photographs for The Mangrove Coast, a book Bickel was writing about the long and colorful history of Florida’s Gulf Coast.

Featured in Walker Evans: Florida are the surprising images Evans took during that six-week stay in the area, which constitute a little-known chapter in Evans’s distinguished career. Far from stereotypical postcard pictures of sandy beaches and palm trees, Evans captured a region of contradictions. Here in the nation’s seaside vacationland, Evans focused his lens on decaying architecture, crowded street scenes, retirees, and numerous images of animals, railroad cars, and circus wagons from Ringling Brothers and Barnum and Bailey Circus, whose winter home was Sarasota.

Accompanying the fifty-two images in Walker Evans: Florida is novelist Robert Plunket’s wry account of the human and geographic landscape of Florida.

Robert Plunket is a novelist, columnist, and actor who lives in Sarasota. He is the author of My Search for Warren Harding and Love Junkie.