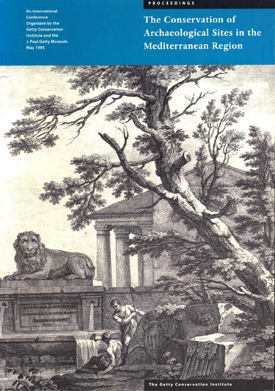 The Conservation of Archaeological Sites in the Mediterranean Region

One of the greatest challenges faced today by those responsible for ancient cultural sites is that of maintaining the delicate balance between conserving these fragile resources and making them available to increasing numbers of visitors. Tourism, unchecked development, and changing environmental conditions threaten significant historical sites throughout the world.

These issues are among the topics dealt with in this book, which reports on the proceedings of an international conference on the conservation of classical sites in the Mediterranean region, organized by the Getty Conservation Institute and the J. Paul Getty Museum held May 6–12, 1995. The book includes chapters discussing management issues at three sites: Piazza Armerina, Sicily; Knossos, Crete; and Ephesus, Turkey. While visiting these sites, conference participants examined how issues raised at these locales can illuminate the challenges of management and conservation faced by complex heritage sites the world over. Additional chapters discuss such topics as the management of cultural sites, the reconstruction of ancient buildings, and ways of presenting and interpreting sites for today’s visitors.

Marta de la Torre has been the director of the Training Program at the Getty Conservation Institute since 1985. From 1981 to 1985 she was coordinator of Special Projects of the International Council of Museums in Paris.

Margaret Mac Lean has been director of the Documentation Program at the Getty Conservation Institute since 1993. Prior to this, she was senior coordinator of the Training Program of the GCl, and earlier, she was executive director of the Center for Field Research at Earthwatch.

Sharon Sullivan is the executive director of the Australian Heritage Commission. She was previously with the New South Wales National Parks and Wildlife Service. She has taught cultural heritage management in the United States, Australia, and China, and has developed natural heritage conservation policies in Australia.

Christos Doumas has been professor of archaeology at the University of Athens since 1980 and was with the Department of Antiquities for twenty-five years. He is a member of Academia Europaea, Society of Antiquaries (London), the German Archaeological Institute, ICOMOS, and the Archaeological Society at Athens. He is currently director of the excavations at Akrotiri.

Hartwig Schmidt has been professor of conservation of historic buildings at the Faculty of Architecture of the Technical University in Aachen, Germany, since 1993. From 1979 to 1983 he carried out a research assignment at the German Institute of Archaeology in Berlin. In 1984 and 1985, he was head of the research group at the Institute of Conservation in Berlin. From 1985 to 1993, he was head of the Research and Documentation Center at the University of Karlsruhe, working on the Conservation of Historically Important Buildings. He is a member of ICOMOS and of several professional groups in conservation.

Renée Sivan is a heritage presentation specialist, museum planner, and developer of historical sites. She is in charge of presentation and interpretation of major archaeological sites developed by the Israel National Parks Authority and the Israel Government Tourist Corporation. In addition, she lectures on heritage presentation at Haifa University, Haifa, as well as at academic institutions in Europe. For fifteen years, she served as chief curator of the Tower of David Museum of the History of Jerusalem.

Nicholas Stanley-Price is an independent consultant in cultural heritage preservation. After ten years of archaeological fieldwork and administration in the Middle East, he was on the staff of the International Centre for the Study of the Restoration and Preservation of Cultural Property (ICC ROM) in Rome, from 1982 to 1986. He was deputy director of the Training Program at the Getty Conservation Institute from 1987 to 1995.

John K. Papadopoulos is associate curator of antiquities at the J. Paul Getty Museum. Before his appointment in 1994, he was deputy director of the Australian Archaeological Institute at Athens and assistant professor of archaeology at the University of Sydney. He is also deputy director of the excavations at Torone in northern Greece.

Martha Demas joined the Getty Conservation Institute in 1990 as a fellow in the Training Program. In 1992 she joined Special Projects, where she serves as project manager.