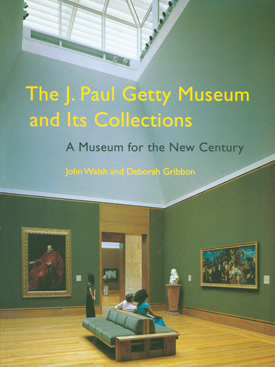 The J. Paul Getty Museum and Its Collections: A Museum for the New Century

In December 1997 the J. Paul Getty Museum opened its new home in the spectacular Getty Center, designed by the renowned architect Richard Meier and dramatically sited in the Santa Monica Mountains above Los Angeles. This will constitute the third home of the Getty Museum collections, which were first displayed in J. Paul Getty’s ranch house in Malibu and later were housed in the splendid reconstruction of an ancient Roman villa that Getty had built on the grounds of his Malibu estate.

A lively text by the director and associate director of the Museum along with archival and recently commissioned photographs provide a biography of the Museum’s benefactor. In addition, the book presents a history of the buildings that have housed his collections and of the collections themselves�first formed by Getty during his life and greatly expanded in the years following his generous and much-heralded bequest.

Fascinating and rarely seen photographs reveal the life that Getty led as he traveled the world building his oil empire and, during the later part of his life, in his great Tudor mansion in England. Documents and photographs from the archives of the Museum take readers through the painstaking construction first of the Villa in Malibu and then of the new Getty Center in Los Angeles. Finally, reproductions of more than 100 masterpieces show the range and depth of the Getty Museum collections.

John Walsh has been the director of the J. Paul Getty Museum since 1983. He was previously a curator at the Metropolitan Museum of Art and the Museum of Fine Arts, Boston. He is the author of the recently published Jan Steen: The Drawing Lesson in the Getty Museum Studies on Art series.

Deborah Gribbon is associate director and chief curator at the Getty Museum, to which she came in 1984. She has been curator of the Isabella Stewart Gardner Museum in Boston and is a specialist in French nineteenth-century painting.