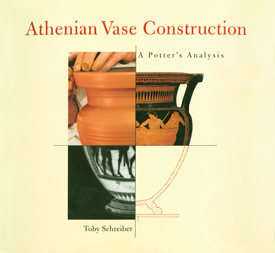 Modern studies of ancient Greek vases have most often focused on the iconography of the painted images. Yet we know that in antiquity the potting of the vases was held in at least as much esteem as the painting, and sometimes potters proudly signed their wares. This book analyzes the construction methods used by Attic potters in the forming of their vases.

Based on her study of Greek pottery sherds and vases and on her profound hands-on knowledge of pottery construction techniques, including experiments with the potting of Attic shapes, Toby Schreiber describes how ancient Greek potters constructed their vases. Drawn in large part from vases and fragments in the collection of the Getty Museum, the many photographs that accompany the text show how much even seemingly insignificant sherds may reveal about technique when studied by someone knowledgeable about potting. The drawings—all done by the author—demonstrate step by step with admirable clarity how the potter executed his craft.

The in-depth look at the techniques of pottery-construction techniques presented in this book is bound to increase modern admiration for the abilities of ancient Greek potters.

Written by a master potter, this is a book both for those who know little or nothing about potting techniques and for those who already have an understanding of these matters.

Toby Schreiber is a master potter who became fascinated with the construction techniques used by the potters who created the classic Greek vases. An art graduate of Cornell College with a major in ceramics, she spent years creating and selling her pottery. In the mid-1970s, after the Getty Museum had been built only a few miles from her seaside studio in Malibu, California, she became associated with the Museum as a gallery teacher, and she had the opportunity to see and examine the Museums collection of Greek vases and their fragments. She soon realized that there was a need for a seasoned potter to analyze systematically the construction techniques used in the creation of these magnificent pieces. She therefore gradually tapered off her own creative work and spent more time analyzing her study objects, publishing several articles along the way. While the majority of her research was done at the Getty Museum, she also pursued her project in major museums all over the world. She participates in Getty Museum educational projects, helping conduct workshops, making videos demonstrating potting techniques, and working as a gallery teacher. Her enthusiasm, talent, analytical prowess, technical knowledge, and love of her subject are all reflected in the text and illustrations she has created for this book.