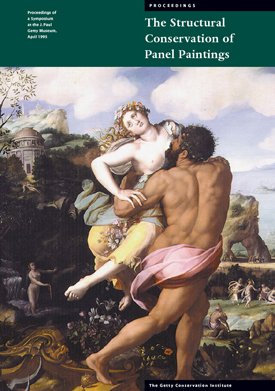 The Structural Conservation of Panel Paintings

This volume presents the proceedings of an international symposium organized by the Getty Conservation Institute and the J. Paul Getty Museum, April 24–28, 1995. The first conference of its kind in twenty years, the symposium assembled an international group of conservators of painted panels, and gave them the opportunity to discuss their philosophies and share their work methods.

Odile Bäy entered the paintings conservation department of the Louvre Museum in 1967; she was later appointed director of the department. She collaborated with the cabinetmaker René Perche until his retirement and then with his successor, Daniel Jaunard of the Atelier Claude Huot, until her retirement in 1989.

Ségolène Bergeon became a professor of physics in 1965 and a museum conservator in 1969. She joined the Service de Restauration des Peintures des Musées Nationaux in 1970, serving as director from 1981 to 1988. Her career has included work at the Villa Medicis and the International Centre for the Study of the Preservation and the Restoration of Cultural Property, Rome (ICCROM), and she became the president of the ICCROM Council in 1993.

George Bisacca is a conservator at the Metropolitan Museum of Art in New York, where he has worked since 1983 and holds an adjunct professorship at the Institute of Fine Arts, New York University.

Robert A. Blanchette, Ph.D., is a professor in the Department of Plant Pathology at the University of Minnesota at Minneapolis St. Paul.

Simon Bobak, conservator of paintings, currently works in London. He is a fellow of the International Institute for Conservation and holds the position of honorary chief conservator at the Hamilton Kerr Institute, Cambridge, England.

David Bomford, who is now senior restorer of paintings at the National Gallery, London, joined that institution as a junior restorer in 1968. He serves as secretary-general of the International Institute for Conservation. In 1996–97, he was the first conservator to become Slade Professor of Fine Art at Oxford University.

Al Brewer has conserved easel paintings, specializing in panel structural work, at the Hamilton Kerr Institute, University of Cambridge, where he has also taught. He has concentrated on researching the effects of overall reinforcement structures on the preservation of panel paintings.

Ciro Castelli began work as a joiner in 1957, progressing to cabinetmaker for a private company. In 1966 he began restoring panel paintings and wooden structures at the Fortezza da Basso’s state-run laboratory, then with the Opificio delle Pietre Dure e Laboratori di Restauro, Florence, Italywhere he has also been a teacher since 1978. As a consultant and restoration expert representing the public museums of Italy, Castelli has served on official delegations at international art meetings.

Vinod Daniel he was a senior research fellow in the environmental sciences division at the Getty Conservation Institute from 1991 to 1994. He is presently scientific officer at the Australian Museum in Sydney, Australia.

Gilberte Emile-Mâle became head of paintings restoration at the Louvre Museum in 1950 and served as head conservator of the Service de Restauration des Peintures des Musées Nationaux from 1971 until her retirement in 1981.

Jean-Albert Glatigny, an art restorer, specializes in the treatment of wood supports. In addition to his restorer’s activities at the lnstitut Royal du Patrimoine Artistique (IRPA), Brussels, and abroad, he teaches at several restoration schools and participates in studies of works of art and conducts research on ancient techniques of woodworking.

Gordon Hanlon was assistant curator of Road Transport and Agricultural Implements at the Museum of Science and Technology, London from 1980 to 1984. After a four-year studentship at the Victoria and Albert Museum, London, he joined the J. Paul Getty Museum as an intern and is now associate conservator in the Decorative Arts and Sculpture Conservation department specializing in the conservation of gilded furniture.

R. Bruce Hoadley is a professor in wood science and technology at the University of Massachusetts at Amherst. His wood identification analyses have been included in catalogues of major collections, including those of the Metropolitan Museum of Art in New York, the Garvan Collection at Yale University, the furniture collection at the J. Paul Getty Museum, and the diplomatic reception rooms at the U.S. Department of State.

James S. Horns was a paintings conservator at the Minneapolis Institute of Arts from 1974 to 1978 and at the Upper Midwest Conservation Association from 1979 to 1986. Since that time he has been a conservator in private practice in Minneapolis.

Claude Huot carries on a two-generation tradition of cabinetmaking. An avid personal interest in airplanes and gliders has allowed him to become better acquainted with various uses of wood and its mechanical behavior.

Daniel Jaunard is a cabinetmaker and restorer of support frames for easel painting. He has previously worked with René Perche at the Atelier Claude Huot and is licensed by the Service de Restauration des Musées de France.

Patrick Mandron is a cabinetmaker and restorer of support frames for easel painting. He teaches at the Sorbonne, Université de Paris I in the Maîtrise des Sciences et Techniques de la Conservation des Biens Culturels. He is licensed by the Service de Restauration des Musées de France.

Raymond Marchant has a background in design engineering, carpentry, cabinetmaking, and furniture restoration. He has also worked for John Bull in London as a technician restoring metal sculpture. In 1989 he joined Simon Bobak in association with the Hamilton Kerr Institute (HKI), Cambridge, England.

Giovanni Marussich was a wood conservator for panel paintings at the Fortezza da Basso, part of the Opificio delle Pierre Dure e Laboratori di Restauro (formerly the Soprintendenza alle Gallerie) in Florence from 1962 to 1983. Since then he has done conservation on panel paintings for various institutions and has taught a course on wood conservation at the Museo de Arte de Catalunya in Barcelona. He has also been a consultant to the J. Paul Getty Museum.

Ian McClure became head of paintings conservation at Glasgow Art Gallery and Museum in 1978. In 1982 he was named assistant to the director at the Hamilton Kerr Institute, where he became director in 1983.

Marion Mecklenburg joined the Conservation Analytical Laboratory of the Smithsonian Institution in 1987 where he is a senior research scientist and where for several years he was the assistant director for conservation research. He has also been an adjunct professor in the Department of Conservation at the University of Delaware, an assistant professor and director of the Fracture Mechanics Laboratory at the University of Maryland, and coordinator of the graduate program for material science at the Johns Hopkins University.

Anthony M. Reeve is senior restorer at the National Gallery, London, where he joined the conservation department in 1963. Since 1977 he has been in charge of all structural work, research, development, and application of improved methods of conservation.

Mervin Richard joined the staff of the lntermuseum Laboratory in Oberlin, Ohio, upon graduation and then held positions as a paintings conservator at the Philadelphia Museum of Art and at the Winterthur Museum. Since 1984 he has been the head of exhibition conservation at the National Gallery of Art in Washington, D.C., where he is also the deputy chief of conservation. He has served as cochairman of the International Council of Museums (ICOM) Working Group for the Care of Works of Art in Transit, and as cochairman of the ICOM Working Group for Preventive Conservation.

Andrea Rothe has been conservator of paintings at the J. Paul Getty Museum since 1981. After an internship at the Uffizi Gallery in Florence he worked with a gilder, Rafaello Bracci, the restorers Augusto Vermehren, Gaetano Lo Vullo, Leonetto Tintori, and Alfio Del Serra, followed by internships with Hermann Lohe at the Bavarian State Galleries in Munich and Josef Hajsinek and Franz Sochor at the Kunsthistoriches Museum in Vienna. Then he started working on contract for the Italian state in Florence, Naples, Urbino, Arezzo, and Siena and became an assistant to Oskar Kokoschka at the School of Vision, in Salzburg.

Ulrich Schiessl has been a professor in the conservation department at the Academy of Fine Arts in Dresden since 1983. He is a member of ICOM and an honorary member of the Swiss Association for Conservation and Restoration.

Arno P. Schniewind joined the Forest Products Laboratory, University of California, Berkeley, in 1956 teaching courses in the mechanical behavior of wood and wood-based materials. In 1982 he became interested in the application of wood science to the conservation of wooden artifacts. Since his early retirement in 1991, he has been professor emeritus and continues to be active.

Charles S. Tumosa has twenty-three years of experience running analytical laboratories and has spent his career examining and determining the character of materials. At present he is a senior research chemist at the Smithsonian Institution, where he works on the chemical and mechanical properties of cultural objects.

Luca Uzielli is a professor of wood technology and forest operations at the University of Florence, Florence, Italy, specializing in the evaluation, restoration, and conservation of wooden artifacts.

Zahira Véliz began working as a freelance conservator in Spain, collaborating extensively with the World Monuments Fund and the Royal Foundation of Toledo, and working in the conservation department of the Prado Museum in Madrid. She has taught at the Courtauld Institute, London, and at University College, London. Since 1990 she has been working privately in London and Spain, lecturing and writing on technical aspects of sixteenth- and seventeenth-century Spanish painting.

Jørgen Wadum has worked as a freelance paintings conservator since 1983 and worked at Rosenborg Palace, Copenhagen, in 1987–88. In 1989 he was employed as a lecturer at the School of Conservation and at the University of Copenhagen. From 1990 to the present, he has been chief conservator of paintings at the Royal Picture Gallery Mauritshuis, The Hague. He is also the coordinator of the International Council of Museums Committee for Conservation Working Group on Scientific Study of Paintings: Methods and Techniques.

Philip Walker is a practical worker in wood with a special interest in the historical and contemporary use of tools and techniques of various trades and cultures. In 1987 he was elected a fellow of the Society of Antiquaries of London. He is president of the Tool and Trades History Society, founded in 1983, which has members in eighteen countries worldwide.