Public Programs
Selected Shorts: Let Us Tell You a Story
The Getty Center
Produced by New York's Symphony Space, Selected Shorts is an annual series featuring actors from stage, screen, and television reading classic and new short fiction. The series is held each spring at the Getty Center.

Pen and paper, a tango, peanut butter and jelly: some things just take two. The hit public radio show and podcast Selected Shorts returns to the Getty to celebrate the power of two with classic and contemporary short fiction featuring a pair of strong characters that push one another to unexpected conclusions, and stories that emphasize what happens in moments of great cooperation, competing desires, and unexpected encounters. At this weekend of literature in performance, renowned actors of stage and screen will be paired with authors to bring the written word to life. Grab your partner, best friend or your arch-nemesis and find out why two heads are better than one. 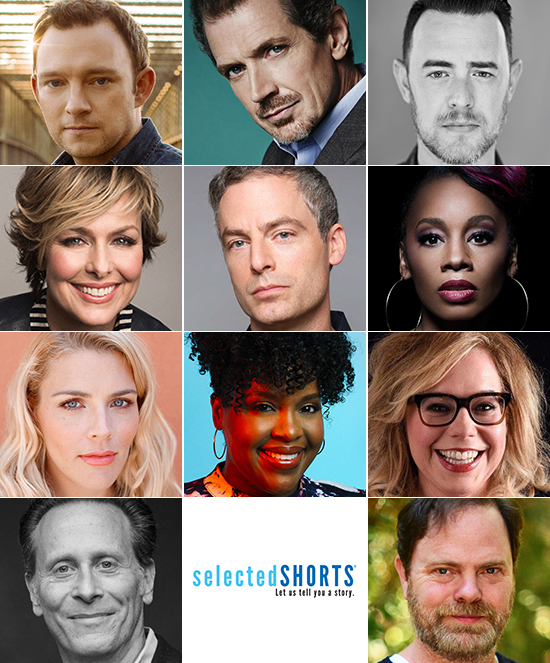 "He and She" by Anton Chekhov (Translated by Michele A. Berdy)
Performed by Melora Hardin and Gildart Jackson

"Something Shiny" by Elizabeth Crane
Performed by Anika Noni Rose

"A Happy Dream" by Steve Almond
Performed by Colin Hanks

"Any Other" by Jac Jemc
Performed by Busy Philipps

Cast and stories are subject to change.

Most recently in the series

Selected Shorts 2019: Entanglements
March 23 and 24, 2019
That classically trained, Oscar-caliber actor who brings gravitas to an enduring text. That quirky, indie darling who wrings every little laugh from a modern writer's dialogue. Sometimes, the marriage between performer and text is undeniable—the connection is dynamic and uncanny, yet completely natural. The hit public radio show and podcast Selected Shorts takes things one step further in an evening of memorable live performances. In collaboration with actors and special guest introducers, the beloved series pairs stories and storytellers sure to fit like a glove.

Selected Shorts 2018: A Feast of Fiction
March 24 and 25, 2018
Open up and say "Mmm," as longtime public radio staple Selected Shorts whets your appetite for an evening of mouthwatering food fictions. Whether the stories take place over steak au poivre on the crisp, white tablecloth at a five-star restaurant or huddled above a can of beans on the camp stove, they prove George Bernard Shaw's contention that "there is no love sincerer than the love of food." Noted actors from TV, film, and the Broadway stage bring every catty celebrity chef and avowed Spam connoisseur off the page. Be warned, these decadent fictions will make you forget your calorie count and order two desserts.

Selected Shorts 2017: April Antics: Fictions & Foolery
April 1 and 2, 2017
The popular radio show and podcast Selected Shorts returns for the annual spring fling with some of the nation's best stage and screen actors who will perform a program of everything from light farce to biting satire, as well as some rich, reflective tales of everyday human folly. Whether witnessing mischievous cats as they outwit their wicked owners or traveling with a blind magician, these three distinct programs will leave you feeling treated, not tricked. And Beyoncé will perform a musical half-time show as humorist Mark Twain—okay, we couldn't resist getting started early—April Fool's! Jane Kaczmarek hosts the series and leads an all-star cast including René Auberjonois, Paget Brewster, Yvette Nicole Brown, Sharon Gless, Tony Hale, Michael Imperioli, Justin Kirk, Joe Mande, Christina Pickles, Liev Schreiber, and Kirsten Vangsness.

Selected Shorts 2016: Let Us Tell You a Story
March 19 and 20, 2016
Inspired by the Getty Center's exhibition Noir: The Romance of Black, the popular public radio podcast Selected Shorts returns for a weekend of live performances of stories exploring darkness and light. Hollywood and stage actors perform adventurous fiction that leads you through a landscape of treachery, madness, and redemption. The weekend features three shows full of cryptic characters, mysterious surroundings, and that long-awaited "Aha!" moment. From surviving the apocalypse to unmasking family secrets, these thrilling stories will leave you breathless and wanting more.

Selected Shorts 2015: Tales after Dark
March 21 and 22, 2015
The popular public radio series and podcast returned for a weekend of live performances, offering a varied selection of stories set after hours. Tales historical, present day and futuristic were all in the mix. A romantic soiree, a fantastic exploration of the moon, a blind woman's adventures in a mysterious Manhattan, a wild holiday party during a blizzard, a lonely motel on a deserted road, a rendezvous at a bar on a Parisian side street, a dreamy after-hours adventure in a time-travel machine, and a funny family movie night with an unexpected guest are among the after-dark settings and scenarios of these romantic, mysterious, fantastical, gritty, magical, and compelling tales. Robert Sean Leonard hosted the series and lead an all-star cast including Sean Astin, Wren T. Brown, Wyatt Cenac, Heather Goldenhersh, Jane Kaczmarek, Christina Pickles, Liev Schreiber, Kirsten Vangsness and more.

Selected Shorts 2013: Passions & Pursuits
March 23 and 24, 2013
The popular public-radio series was back with live performances at the Getty that detailed fictions about our favorite leisure activities. Actors from stage and screen performed stories about the pleasures and travails of all the things we love to do—from baking to ballroom dancing, card-playing to movie-watching, and knitting to sex. 2013's stellar lineup included readings by Leonard Nimoy, Jane Kaczmarek, Robert Sean Leonard, Kate Burton, Alison Pill and more. A collection of works by Etgar Keret, Tess Gallagher, Joyce Carol Oates, John Cheever, and Dorothy Parker were selected to feed your passion for short fiction.

Selected Shorts 2010: At Home
May 1 and 2, 2010
The annual literary series returned in 2010 with a weekend of stories about home. Moving, comical, romantic, heart wrenching, heartwarming, and thought provoking, these readings examined the way we live. Featuring readings by René Auberjonois, Kirsten Vangsness, Fionnula Flanagan, Ed Asner, Jane Kaczmarek, and others, the programs included works by Richard Ford, Miranda July, Yasunari Kawabata, John Updike, and Julie Otsuka, to name a few.