Miracles and Martyrs: Saints in the Middle Ages
The exhibition is presented in two parts. The pages of the manuscripts will be turned to reveal further treasures on December 3, 2013.

This exhibition of illuminated manuscripts from the permanent collection reveals the widespread appeal and influence of saints in art and society during the Middle Ages. Medieval artists pictured them in images of incredible horror and great beauty, designed to offer inspiration and comfort to the faithful. 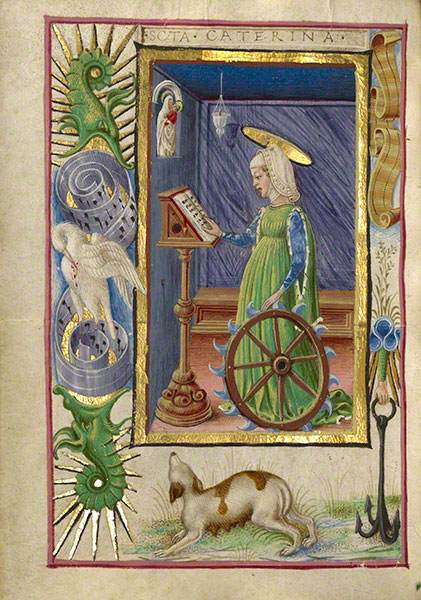 Venerated for their willingness to suffer torture and death, their ability to perform miracles, and their privileged place in heaven, saints were integral to medieval Christianity. Graced with divine favor, they followed Christ's model of behavior and goodness, revealing the divine in the earthly realm.

Martyrs were greatly admired for braving intense persecution and willingly dying for their faith. In some images, artists produced arresting scenes of martyrs at the moment of suffering, while in others, saints hold the instruments of their torture, serene in the knowledge that salvation awaits. 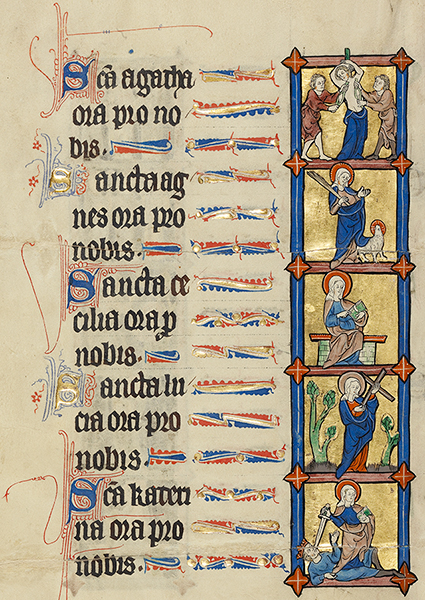 On this page, the artist presents female saints with their names and the simple phrase, "Pray for us." Medieval readers would have easily recognized them by an identifying symbol each holds or by the depiction of their particular martyrdom. At top right, for example, Agatha's breasts are cut from her body, a particularly gruesome form of torture.

Saints experienced spectacular visions, performed miracles on behalf of the faithful, and were blessed by divine intervention into their lives. After death, saints were called upon to intercede, that is, to protect devotees or provide aid. Artists' images of these miracles brought to life the mystical legends for medieval readers. 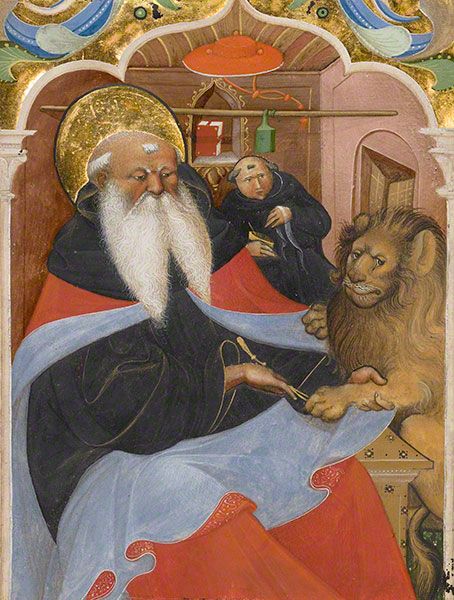 The compassionate Saint Jerome uses golden tweezers to carefully remove a thorn from the paw of a lion that had wandered into his monastery seeking care for its wound. A tiny figure of a fearful monk cowers in the background, in contrast to the monumental figure of Jerome.

Kneeling side by side, the aristocratic saints Aimo and Vermondo hold a representation of a monastery church. They helped fund construction of the actual church to honor Saint Victor, to whom they had successfully prayed for rescue from a treacherous hunting expedition.

This manuscript follows the adventurous and romantic exploits of the medieval nobleman Gillion de Trazegnies. He journeys to Egypt on pilgrimage, mistakenly becomes a bigamist, and dies in battle as a glorious hero. 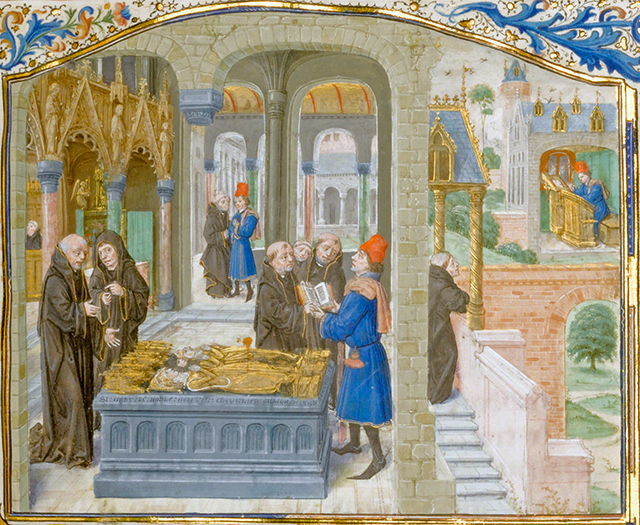 Loading the video
This image is a detail of the first scene in the manuscript and depicts the events that led to the discovery of his story. According to the author of the book, he was visiting a church where he found an unusual triple tomb of a knight flanked by two women, seen in the foreground in a detailed church interior. The figures represent Gillion and his two wives.