Painting and Narrative
Building on the 13th-century traditions of vita icons, which depicted scenes from the lives of the saints, artists of the early 14th century developed innovative ways of portraying elaborate, multiepisode religious narratives, especially those drawn from the life of Christ and the Christian saints.

The Life of Christ 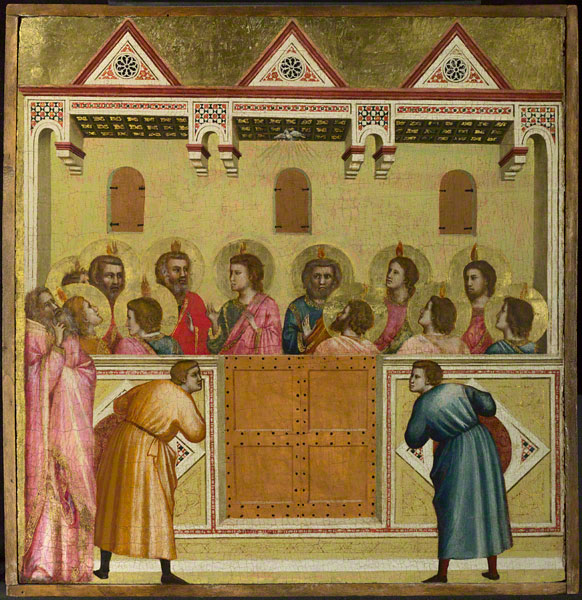 Giotto and Pacino both portrayed extended stories through a series of individual events shown in sequence like frames in a movie or a graphic novel. This treatment allowed the viewer to contemplate each moment in turn and to meditate on its significance.

The painting above is a scene from such a sequence. It belongs to an ensemble of seven panels depicting major events from the life of Christ, perhaps forming part of an altarpiece or an autonomous narrative series. The story begins with his birth and visitation by the magi (the three wise kings), and ends with Pentecost (image above), the moment when the Holy Spirit descended upon the apostles in the form of a dove. In the panels, Giotto depicts a range of emotions and gestures as a means to tell each story visually.

Explore the painting and its companion panels in depth in the interactive feature.

One of the most beloved and famous literary masterpieces written in Italian, the Divine Comedy by Dante Alighieri (about 1265–1321) traces the author's journey from the depths of hell to the heights of heaven, guided first by the ancient Roman poet Virgil (70–19 B.C.) and then by Dante's beloved, Beatrice. The book is divided into three sections: Inferno (hell), Purgatory, and Paradise. 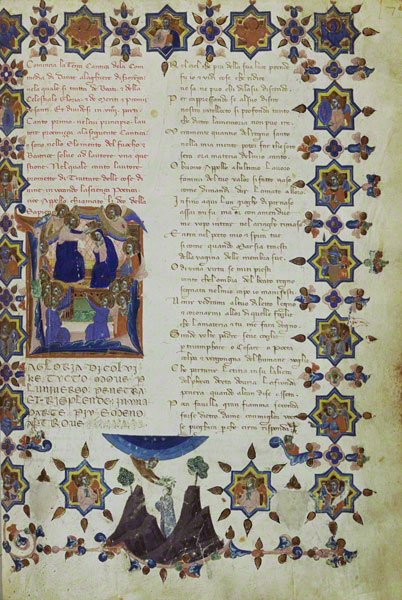 Soon after Dante's death, Pacino di Bonaguida and the Master of the Dominican Effigies began illuminating this text, visualizing the captivating events that the author described and feeding the demand for illustrated copies of what was quickly becoming a best seller among Florentine citizens. Some Divine Comedy manuscripts simply feature initials filled with narrative scenes at the beginning of each of the three sections, and a rare few contain an abundance of such images. The groundbreaking visual iconography developed for representing Dante's narrative set a standard for the later artists who illuminated this popular text well into the 15th century.

The page above is from the earliest illuminated and dated copy of Dante's Divine Comedy. In an initial L that opens the text of Paradise—"La gloria di colui che tutto move" ("The glory of the one who moves all things")—the Virgin Mary is crowned queen of heaven, a fitting visual complement to a scene depicting Dante's own coronation with the laurel wreath, reserved for poets (at the bottom of the page). The inhabitants of heaven, including many types of angels, from the red, multiwinged seraphs to warrior archangels, and Christ blessing at the top, fill 19 eight-pointed stars. One of the foremost scribes in Florence, Francesco di Ser Nardo da Barberino, wrote this copy of the text and signed and dated the last page of the manuscript.

Florence at the Dawn of the Renaissance: Painting and Illumination 1300–1350
Edited by Christine Sciacca

At the Art Gallery of Ontario