The J. Paul Getty Museum seeks to inspire curiosity about, and enjoyment and understanding of, the visual arts by collecting, conserving, exhibiting and interpreting works of art of outstanding quality and historical importance. To fulfill this mission, the Museum continues to build its collections through purchase and gifts, and develops programs of exhibitions, publications, scholarly research, public education, and the performing arts that engage our diverse local and international audiences. All of these activities are enhanced by the uniquely evocative architectural and garden settings provided by the Museum's two renowned venues: the Getty Villa and the Getty Center.

Most arts institutions have long had policies that control access to images of works in their collections and typically charge fees for their usage. These fees have ranged from a token amount for scholarly purposes (which is frequently waived) to a significant sum when an image is used commercially. And, in some cases, these permissions are denied. For many museums, however, the fees generated by this policy have only marginally exceeded the costs incurred in the processing and billing of requests. More importantly, there has been a tension between the "commercialization" of art images and the public mission of museums to make art as widely accessible as possible to audiences of all backgrounds. The advent of the digital environment has dramatically changed the parameters of this debate, both at the level of best-practice policy, and in terms of the logistics of image replication and distribution. 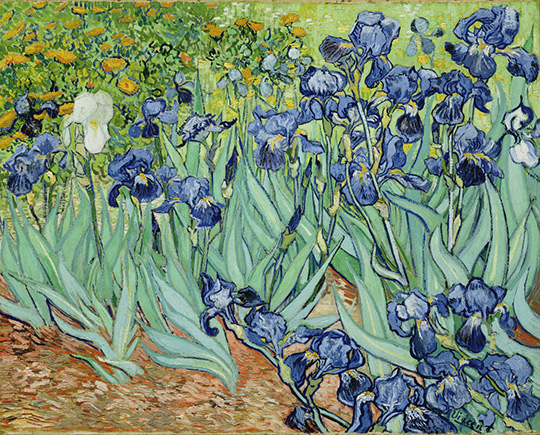 Number one most-downloaded image in the Museum's Open Content program: Irises, 1885, Vincent van Gogh.Cultural and educational institutions around the world are increasingly seeing it as part of their core mission to facilitate the widest possible access to research and educational materials of all kinds—text, images, and the many variations of "mixed" and "interactive" media. At the same time, the great advances being made in the methods and speed of digitization, and thus the increasing quantity of images and other data available, have made it possible to share vastly greater quantities of material—now searchable, linked, and easily translatable—with anyone who has Internet access. Proprietary control of such knowledge and its textual and visual manifestations is being rolled back in the interests of universal access. This is a sea change in the philosophy of education.

In August 2013, the Getty stepped to the forefront of this process by introducing an Open Content policy, allowing the open and unrestricted use of images of works in our collections that are in the public domain, or to which the Museum holds the copyright. This resulted in the immediate availability of some 4,600 images from the Getty Museum's collections of paintings, drawings, manuscripts, photographs, antiquities, sculpture, and decorative arts. Within months, another 5,400 images were made available by the Getty Research Institute (GRI), bringing the total number of images available through the Getty's Open Content program to roughly ten thousand. Over the course of the year, as further images from our collections were photographed and cleared for rights, they too were added to the growing body of works available for download. Today, visitors to the Getty's website have more than 87,000 images available for free download. 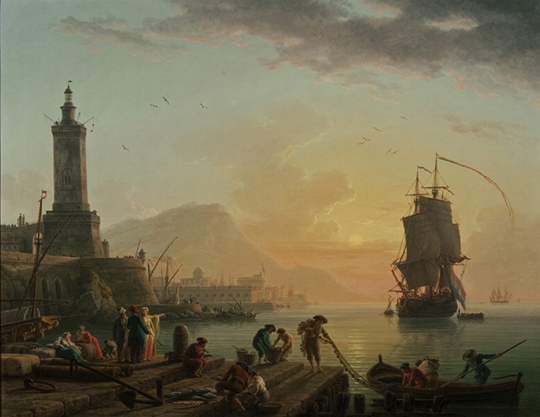 Number two most-downloaded image in the Museum's Open Content program: A Calm at a Mediterranean Port, 1770, Claude-Joseph Vernet.This new policy is a major step forward in building a larger audience and providing broader access to the Getty's extensive collections. Previously, images were made available upon request, for a fee, and granted specific use permissions with terms and conditions. Today, while we request general information about the intended use of the image, we do not restrict their use and no longer charge a fee.

While a number of institutions have recently made news for offering free, downloadable images of their collections, there are two areas where the Getty has distinguished itself from its peers and, indeed, established a new standard for open access. First, the files offered by the Getty are all of high-resolution and reproduction quality. This allows for the broadest range of public usage, whether it be as a screensaver on a personal computer or as the cover of a scholarly publication. Additionally, all downloaded image files from the Getty's website include embedded metadata about the work of art and a reference to the Getty as the owner of the object, ensuring that accurate information about the work travels with the image. 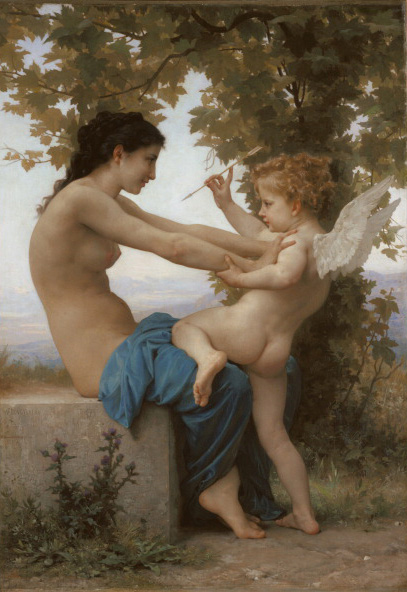 Number three most-downloaded image in the Museum's Open Content program: A Young Girl Defending Herself against Eros, about 1880, William Adolphe Bouguereau.The Getty was founded on the conviction that exposure to and understanding of the visual arts makes the world a better place. The sharing of our collections digitally is a natural extension of this mission. The new opportunities this opens up for education at all levels are dramatic. Artists, students, teachers, writers, and countless others rely on works of art to learn, to tell stories, to exchange ideas, and to feed their own creativity. As a recent issue of the Museum Edition of the New Media Consortium (NMC) Horizon Report states: "it is now the mark—and social responsibility—of world-class institutions to develop and share free cultural and educational resources."

Within minutes of announcing our Open Content program, the Getty's online magazine, The Getty Iris, received more than one hundred favorable comments from readers, with one claiming they believe they had just witnessed a miracle! A Wired editorial commented: "This isn't just about democratizing art. It's about integrating art and people's digital lives—and with that, unlocking the creativity that is key to our future progress and humanity."

Perhaps the greatest accolade came from the blog Deviant Art:

It is a watershed moment in the evolution of the social responsibility of organizations that collect exquisite art as part of a public trust—the moment when the J. Paul Getty Museum and Trust, arguably housing the most influential brain-trust for the curation and preservation of art in the world, decides to trust the public, instead of just themselves, with setting the context and use of these works.

How, the blog continues, could this have happened?

Radical moves in tech are commonplace. Radical moves in museum culture almost never happen... The J. Paul Getty Museum's board of directors has gone deviant and we could not be happier!

This euphoric reception extended also to the mainstream press and was reflected immediately in the public's response. By the end of June 2014, more than 200,000 images had been downloaded from the Getty's website, most by private individuals for personal use. Nearly 40 percent were objects from the Museum's paintings collection. Manuscripts (at 19 percent), photographs (at 17 percent), and drawings (at 15 percent) comprised the next most popular categories. Sculpture and decorative arts, and antiquities, accounted for six percent and five percent of the images, respectively. 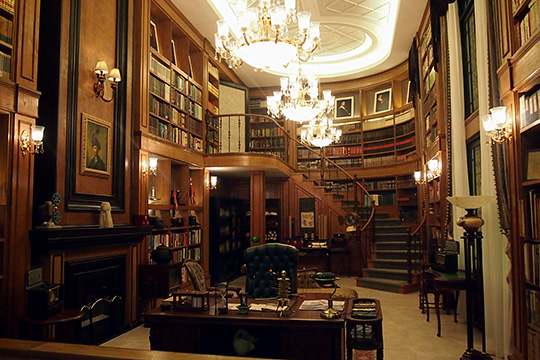 Open Content in use: Rembrandt's Old Man in Military Costume shown on the set of Korean television drama You From Another Star. Photo: Pheuron TayA significant number of the image downloads have been used to support scholarly work in lectures, publications, and research papers. Others have used Getty works to illustrate their personal blogs. All of this we expected. But there have also been many less likely pairings. The Museum's Landscape with Lake and Boatman (1839) by Jean-Baptiste-Camille Corot serves as the cover image of a book of sheet music for Chopin's Rondo in C Major, Opus 73 published by Alfred Music. Fans of the popular Korean television drama You From Another Star will recognize our An Old Man in Military Costume by Rembrandt hanging above the fireplace in the protagonist's library. And film buffs will recall the same painting making a cameo appearance in the popular 2013 film American Hustle, along with other works from the Getty Museum's collection. Both of these placements were the result of set designers accessing images through the Getty's Open Content program.

Perhaps most important of all, the Getty's opening of its collections has prompted many other institutions to reconsider their policies regarding access to images. The trend to open access is now unstoppable, and the outcome will be a democratization of access to culture and the arts that, though unpredictable in specifics, will clearly be transformative. Within museums themselves, eliminating restrictions on the use of comparative images will be critical to providing a richer context for online scholarly catalogues and research projects. Greater access to collections also encourages the exploration and sharing of collections by the general public, allowing them to become "virtual curators."

In the year ahead, two further significant enhancements to our Open Content policy will be rolled out. First, the Getty Museum will launch its new online collection pages. With this, the number of Museum Open Content images available for download will increase three-fold. Second, as part of the GRI's Cultural Object Names Authority (CONA) initiative, the Museum's collections data will be launched as Linked Open Data. This represents a major forward step in organizing our collection metadata to be both more accessible and more interconnected, both within the Getty's digital walls and externally on the Web.